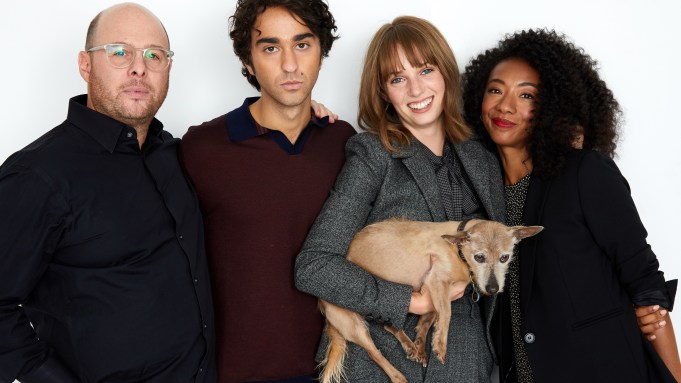 When director Marc Meyers set out to make Human Capital—which follows the story of two families interlinked by an ill-fated business deal and a tragic car accident—he wanted to explore themes of “American class, and the struggles that each of these characters went through on a personal basis” he said at Deadline’s TIFF studio.

Starring Liev Schreiber as Drew, a real estate broker looking to invest in Quint (Peter Sarsgaard)’s hedge fund, and Maya Hawke as Shannon, Drew’s daughter, the film deals with not only themes of class and capitalism, but also family dynamics and the rollercoaster of adolescence.

Alex Wolff plays Shannon’s boyfriend Ian—a young man plagued by his own bad decisions and a general lack of parenting. Wolff, however, is keen that audiences see the pain and nuance in Ian, rather than writing him off as a ‘bad boy’. “I think a lot of people see him as being rude to her, and are put off by the opaque coat he puts on,” he said. “I think sometimes, that can make people not like him, or feel that he is violent and volatile and uncontrolled, which is scary. So, I think some people maybe feel he’s like a disaster, like a hurricane. But I really appreciate that you see him as kind of a fragile victim of his circumstance, because that’s really how I saw him too.”

Ronnie, Ian’s therapist and Shannon’s step-mother, played by Betty Gabriel, is one person who truly sees the good in Ian, while also offering compassion to her husband Drew in the midst of his poor financial decisions. “I think she, in a very righteous way, sees the good in people,” Gabriel said. “She sees the good in Alex’s character Ian, and wants to help heal people.”

With Shannon’s mother having abandoned her, Ronnie approaches the family with a quiet understanding. “I also think that with this family that she’s coming into,” Gabriel added, “she wants to heal them, and make them whole and complete, and sees the fact that this single father needs a nurturing presence of a woman who maybe oversteps boundaries.”