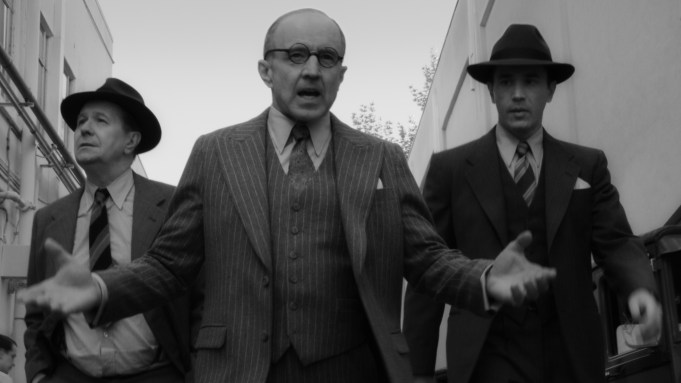 Following the first teaser earlier this month, the official trailer for David Fincher’s Mank has dropped today with a deeper look at the movie about Oscar-winning Citizen Kane screenwriter Herman J Mankiewicz and his tumultuous development of the Orson Welles classic. Check it out above.

Netflix will release Mank in select domestic theaters in November, as it makes a bid for awards contention, and will add it to the streaming service globally on December 4.

Gary Oldman stars as scathing social critic and alcoholic screenwriter Mankiewicz through whose eyes 1930s Hollywood is re-evaluated as he races to finish the Citizen Kane script. In the trailer above, Mank is alternately called “a court jester” and cautioned he’s “hunting dangerous game” in taking on William Randolph Hearst (Charles Dance), upon whom the eponymous Charles Foster Kane was in part based. When Welles (Tom Burke) asks if Mank is “ready and willing to hunt the great white whale,” Mank responds, “Just call me Ahab.”

The film depicts a who’s who of old Hollywood, including Louis B Mayer (Arliss Howard) who quips, “This is a business where the buyer gets nothing for his money but a memory. What he bought still belongs to the man who sold it. That’s the magic of the movies.”

Mank has been a long-gestating passion project for Fincher, with a script by the Oscar-nominated director’s late father Jack Fincher. Its release comes a little over 79 years since Citizen Kane’s original wide theatrical release.

The movie is one of many Netflix 2020-21 awards-season contenders. Its latest, the Aaron Sorkin-directed political drama The Trial Of The Chicago 7 dropped on the service last week.