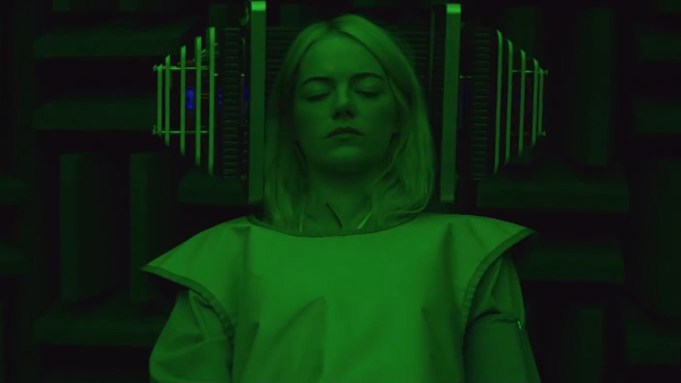 There are more than a few moments in Netflix’s 10-episode Cary Joji Fukunaga-directed Maniac that are so aesthetically precise you might forget to breathe for a beat or two. Launching tomorrow on the streaming service, the multi-genre limited series starring Emma Stone and Jonah Hill — and from Fukunaga, also the just announced Bond 25 helmer, and The Leftovers producer Patrick Somerville — may seem to be aiming to blow your mind, but as I say in my video review above it really touches your heart.

Don’t get me wrong, seemingly set in a variation of the New York City we know, the series co-starring Justin Theroux, Sally Field, Gabriel Byrne and Sonoya Mizuno is a flowing dreamscape for sure. Yet, once things start to heat up after the second episode, the construction by Somerville and the True Detective Season 1 director truly reveals itself, as much as one can say of a show with no definable edges.

Going deeper and wider into the scope of the secretive pharmaceutical trials the characters played by Stone and a delightfully twitchy Hill are participating in, Maniac morphs into a rich family drama limited only by its own imagination. Needless to say, that imagination and the narratives that foster this adaptation of the Norwegian series from Paramount TV and Anonymous Content are vast. The result has to be one of the best things Netflix has put out in a while — and that’s a pretty high standard for the home of The Crown, Black Mirror and Mindhunter.

Although surrounded by a deep bench filled with Oscar winners Stone and Field, and some of the best work Hill and the talented Theroux have ever done, many of the heights achieved by Maniac are thanks to the skill of Somerville and Fukunaga.

As a recent New York Times magazine profile of the Beasts of No Nation director was sure to emphasize, there is a lot to the meticulous Fukunaga, to put it simply. However, again planting his considerable collection of talents in the writer’s playground of Peak TV, Fukunaga, like he did for that 2014 first season of HBO’s anthology series True Detective with Matthew McConaughey, Woody Harrelson and Michelle Monaghan, builds a sturdy argument for the small screen as a director’s medium too, in the right hands.

So, take a look at my video review of Maniac for more of my POV on this mindbender. Will you be taking a trip with the series starting Friday?