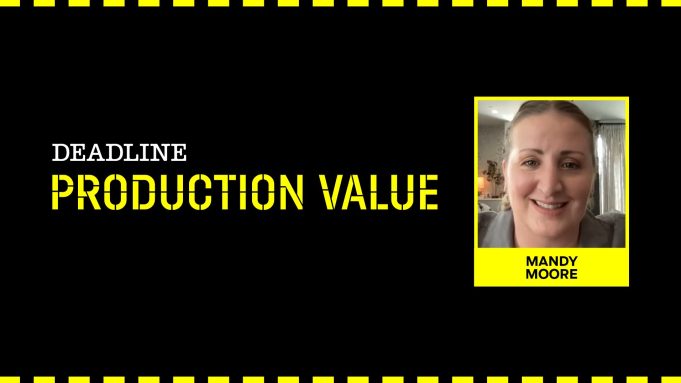 In Zoey’s Extraordinary Playlist, choreographer Mandy Moore found a “dream job”—a series unlike anything else on television, which fully embraced the power of dance as as a storytelling medium.

“It was so much fun to create, and it pushed me…artistically, and challenged me a lot, when it came to my ideas of dance and choreography, and how it is used in storytelling, how it’s shot,” Moore says, in the latest installment of Production Value. “I feel like I have a PhD in camera and dance now.”

The NBC series from creator Austin Winsberg centers on a software developer named Zoey (Jane Levy), who discovers that she has the ability to hear the innermost thoughts of people around her as songs and musical numbers.

Given her involvement in almost every beat of Zoey’s, Moore was also credited as a producer on the series, which she notes is “a game-changer” for a choreographer. “Because then, you’re not coming in, in the 11th hour,” she notes. “You’re in these earlier conversations about the creation and what you’re doing, which ultimately makes your job a lot easier.”

In  her time on Season 2, she also got to direct her first episode of scripted television, which she found to be “a good challenge.” With her episode, “Zoey’s Extraordinary Double Date,” she looked to swing for the fences, choreographing a one-take “heart song” centered on Skyler Astin’s Max and the Bay to Breakers piece featuring over 200 performers, among other large group numbers.

Moore admits that when she was first asked if she’d like to direct the episode, she had to take “a meditation moment.” To feel confident in her ability to pull the episode off, she needed to understand that she wasn’t “starting from zero.”

After all, the jobs of the director and the choreographer aren’t all that dissimilar. “Creating the dance on Zoey’s, they’re like scenes played out to music. So, a lot of the prep…and the language of where a camera might see something, was very similar,” she explains. “Once I framed it in this idea that [directing is] basically choreography or dance, just without music, I knew that that’s also my strength. I know how to move bodies around the space. I know how to have cameras follow something to the next thing, and I also know emotion.”

Ultimately, Moore couldn’t have had “a more supportive first time” directing. In fact, she really took to the craft and would like to continue to pursue it going forward.

“I would say that I’m probably more interested in anything that has to do with music or performance or dance. Again, that’s my lane, and the thing I know,” she notes, “not to say that I couldn’t do something that maybe was a straight drama or a straight comedy that didn’t have that.”

Zoey’s Extraordinary Playlist was canceled in June, after its second season wrapped, which was “a super bummer” for Moore. Fortunately, though, it’s looking like she and the creative team will get a TV movie to wrap their story up.

Over the course of the show’s two seasons, Moore helped bring more than 130 musical numbers to life. The key to making each its own unique moment was simply approaching each as “a new thing” she’d never seen before.

“Steps are steps are steps. There’s a million steps in the world, but if they’re done in a certain way, to a certain rhythm, or with a certain intention, then they become unique to that moment,” she says.

One of the best parts of the experience of making the show, for Moore, was that she was always able to push for “bigger,” “better” and more diverse explorations of storytelling through dance. “With the writers and Austin, he just wanted to keep pushing all kinds of dance to be integrated within the storytelling,” she says, “and I just thought, this showrunner is like the best person ever, for a choreographer.”

A three-time Emmy winner who claimed a statuette just last year for Zoey’s, Moore began her journey with dance around age eight, though she jokes that she was “dancing from the womb.”

She came to understand dance as a means of expression “with limitless possibilities” given her experience growing up in a family that was “very much into theater.”

Moore jokes now that her Hollywood beginnings were “pretty sketchy.” She moved out to Los Angeles “with nothing” after graduating high school to pursue work as a professional dancer. “My dad and my sister drove me out in my ’94 Jeep Wrangler, and it was so hot, that’s all I remember,” she says. “It was a stick shift and it had no top on it and I thought, this is the worst idea ever, to be on the 405 in the middle of the summer, with a stick shift.”

The choreographer found one of her first mentors in Carrie Ann Inaba, who was the first person to hire her as an assistant choreographer. “I feel like I learned a lot from her when it came to the business, and just how to run a rehearsal, how to run a department, how to schedule things with production. Because that’s a whole ’nother side of choreography that you don’t really talk about,” she notes. “People think it’s just making up the moves, but there’s a whole huge part of it of actually just organizing your department.”

Another key takeaway from Inaba was the importance of iteration in the creative process. “You know, the first version is never the version,” she says. “We may get back to some of the things that were in the instinctual version, but I think in order to find really great work, you have to question it all around, especially when it comes to camera and dance, because there’s no formula.”

Moore found her big break working alongside Inaba on So You Think You Can Dance, remaining with the competition series for 16 years. During that period of time, she graduated from assisting with auditions to serving as one of the show’s creative producers and appearing on camera, as well.

“I was really lucky to be a part of that first wave of choreographers on that show because it was, I think, the first show that really put light on the art of choreography,” she says. “A lot of dance has been in television and film for a long time, but to actually have a name and a face on camera, knowing and having people understand that, ‘Oh, this person made this up, but this person performed it,’ I think if I had a big break, it probably be that one.”

Being a choreographer never gets old for Moore because the job is “never the same thing,” day to day.

Last month, Moore received two Emmy nominations for her choreography on Zoey’s, which bring her to a career total of 10. She shared one of her 2021 nominations with choreographer Luther Brown, who worked with her on such routines as “Black Man In A White World” and “Tightrope.”

Check out our entire conversation with Moore above.