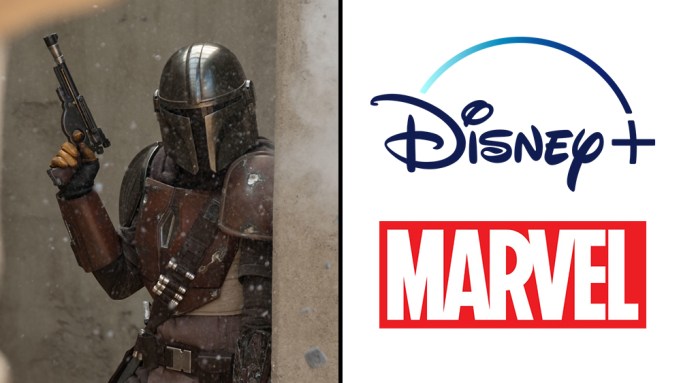 We have seen the future of Star Wars, and it could be on the small screen.

The first live-action Star Wars TV series in the four-decade history of the storied brand launches today with The Mandalorian, which debuted with the entry of Disney+ into the streaming wars. No spoilers, but take a look at the video above for our take on the Jon Favreau-created The Mandalorian, the launch of Disney+ and what it could all mean for Star Wars, Marvel and the Disney empire.

The big-budget The Mandalorian initially seems to skip the cosmic struggles of Jedi Knights in favor of a lone-wolf bounty hunter saga informed as much by classic Clint Eastwood as by Luke Skywalker, though there is a true blast from the Galaxy-far-far-away past at the very end of the first episode that truly raises the stakes.

The title role in The Mandalorian belongs to Pedro Pascal, of Narcos and Game of Thrones fame. Having said that, you’d never know as the actor spends most of his time under a helmet in the Dave Filoni-directed first episode that went live in the early morning today as Disney+’s flagship series.

Otherwise, with a lot to be revealed down the line, there are two things you need to know ASAP about the Favreau-penned and -showrun Mandalorian.

However, it may be the triumph of Marvel as much as Beskar steel – again, check out the video above for more from Deadline’s Chief TV Critic Dominic and our Genre editor Geoff. Certainly, even with some technical stumbles on Day 1, the Bob Iger-run Disney is betting that the Force will be strong with The Mandalorian. After an eight-episode first-season run, a second season has already been ordered and is in the pipeline.

For Season 1 — which sees a second episode land on the new streamer November 15 and then weekly each Friday — the action is set on the lawless fringe of the galaxy shortly after the fiery funeral of Darth Vader on the forest moon of Endor (as depicted in 1983’s The Return of the Jedi.) The scrappy rebellion has toppled the evil Emperor and dispatched the Dark Lord, but that’s only made things more dangerous in the lawless and sometimes icy outposts inhabited by bounty hunters.

That classic cantina scene and its environs (the dive bar is in the seedy spaceport called Mos Eisley) are clearly echoed in the pilot episode, which also conjures the classic intrigue of the bounty hunter sequences from the 1980 sequel The Empire Strikes Back, the darkest installment of the original trilogy. Favreau was among the young moviegoers who were transfixed by the famed cantina scene in the original film, which introduced Han Solo and Chewbacca as denizens of a lawless underworld that was more about profits than prophets. BTW – because this is Disney and theme parks matter – the same oft-parodied scene inspired Oga’s Cantina, the Disneyland eatery that’s a centerpiece of the theme park’s Star Wars: Galaxy’s Edge.

So, watch our Mandalorian preview review and tell us what you think? Does this look like a winner or is it another carbonite freeze?