Continue to Deadline SKIP AD
You will be redirected back to your article in seconds
Skip to main content
July 19, 2018 4:13pm
11Comments 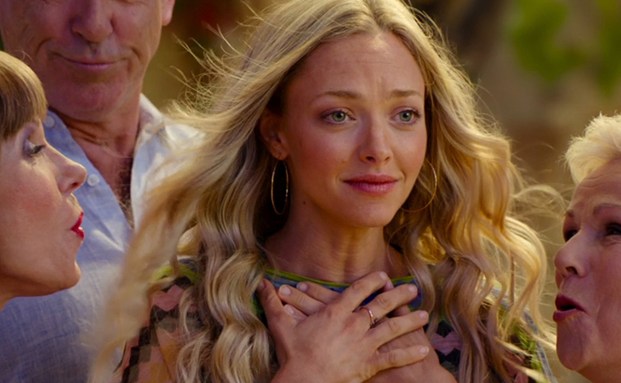 Here we go again. Truer words were never spoken in terms of a movie title than with the new sequel Mamma Mia: Here We Go Again, which picks up the story a decade after the first film became a certifiable musical smash for Universal/Legendary. The new one promises to repeat history, with the original cast back intact, a flashback storyline on how it all began with a group of terrific younger actors and some new prized additions to the cast like, oh, Cher for starters. ABBA has never had it so good.

Set still on the island of Kalokari, the new story concocted by director-writer Ol Parker revolves around Sophie’s (Amanda Seyfried) attempts to open a new establishment called La Bella Donna, named after her late mother Donna (Meryl Streep), who had died the previous year. The opening, though, is fraught with problems and fears that the invitees — including her mother’s old pals as well as her, count ’em, three fathers — won’t be able to get there. As all this drama is happening, the film frequently flashes back to 1979 to tell the back story of how Sophie came about in the first place, with her freewheeling mom (played at that age by the wonderfully vibrant and talented Lily James) involved in three romantic relationships but with no idea who the father is. Jeremy Irvine is Sam (the young version of the Pierce Brosnan character), Hugh Skinner is Harry (the younger Colin Firth), and Josh Dylan is Bill (the younger Stellan Skarsgard), and we see all the complications these three cause with Donna, who also hangs out with BFFs Tanya (Jessica Keenan Wynn, a dead ringer vocally and visually for the older version played again by Christine Baranski) and Rosie (Alexa Davies as the younger Julie Walters role).

Back in present times Baranski, Walters, Brosnan, Firth and Skarsgard all manage to show up, as does even Streep — but you will have to see the movie to how they pull off that resurrection. New to the cast are Sophie’s husband Sky (Dominic Cooper), who is about to become a father himself as we soon learn Sophie is to become the latest a mamma in the tale. Andy Garcia adds some nice flavor and a little twist as the manager of La Bella Donna, and even a bit of a past relationship with Sophie’s grandmother Ruby, played by the irrepressible Cher who, as I say in my video review above, gets the entrance to end all entrances and livens up this movie the minute she literally steps on screen.

Cher was the perfect casting idea, essentially doing Cher and singing a killer version of “Fernando,” just one of many ABBA songs that make this nonstop soundtrack of the Swedish pop legends so hard to resist. So why try? Story-wise it is pretty flimsy stuff, even if this sequel digs a little deeper than 2008’s Mamma Mia! had to since it was basically a showcase for all that swell, toe-tapping music. The flashbacks add flavor to the plot, which basically seems lifted from a 1960s film called Buona Sera, Mrs. Campbell, even though it would appear to be the inspiration for the idea of a girl with three fathers and no idea which is the biological dad.

Of course we get reprises of the title song, “Dancing Queen,” “The Name of the Game,” “Waterloo,” “Super Trouper” and so on, but at least half the soundtrack consists of such lesser-known ditties as “When I Kissed the Teacher,” “One of Us,” “I Wonder,” “Andante Andante” and, best of the newbies, “Angeleyes.” The poignant “My Love, My Life” serves as the sole reason for Streep’s re-appearance towards the end. Best of all is that Brosnan doesn’t get a solo this time.

Mamma Mia: Here We Go Again is the perfect summer tonic, a throwback to a time when movies were light and simply wanted to entertain. That it does, so no resisting here. I say go. Producers are Judy Craymer, and Gary Goetzman (for Playtone). Universal releases it Friday.

Do you plan to see Mamma Mia: Here We Go Again? Let us know what you think.