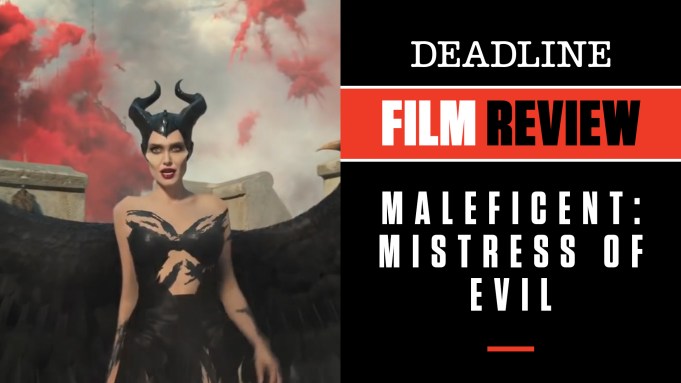 Angelina Jolie and her cheekbones steal the day in Disney’s inevitable sequel to its 2014 monster hit, Maleficent.

This one basically picks up where the first one left off. You might recall that Maleficent (Jolie), the evil, winged sorceress who acts as faerie godmother to Aurora (Elle Fanning), aka Sleeping Beauty, was the one whose kiss awakened her from her deep slumber, not handsome Prince Philip’s (now played by Harris Dickinson). Maleficent’s hard-edged ways softened a bit, but she is still in the danger zone, even as acting as surrogate mom to Aurora, who now is engaged to Philip and planning a big wedding. Eager to include her with the new about-to-be in-laws, Aurora insists that Maleficent accompany her to a big dinner at the palace, home of the King and Queen Ingrith (Michelle Pfeiffer).

It seems our “evil” mistress is awkwardly shy around normal humans, and all the Eliza Doolittle-type training doesn’t really work out before she has a fit and basically blows up the dinner, especially when the Queen (and mother of Philip) — the real evil star of the story — reveals she now will look at Aurora as her own daughter. That doesn’t go down well, and off we go into a spectacular special effects sequence with Maleficent flying out of there, wounded in battle and eventually landing in an Avatar-style jungle area where the castoffs of the land basically are banished.

There she connects with Conall (Chiwetel Ejiofor), the titular leader of the band of winged undesirables. This is all leading to an ultimate confrontation, but Maleficent and Jolie pretty much disappear from the middle section of the picture, as Queen Ingrith and Pfeiffer take over the evil doings of the fairytale. First, she curses her own husband, the King, then plots to turn all the pixie faeries into dust, then prepares for the ultimate battle with Maleficent and her ilk. She’s a real sweetheart.

Meanwhile, Aurora is starting to take charge of her own affairs and we get the romantic subplot going in style. Fortunately there can be no mistake that Jolie is the star here, and she has plenty of surprises left in her arsenal, even when thought to be dead. This is where the elaborate CGI work really comes into play in all its Disney glory. This is not your mother’s Sleeping Beauty, even though the memory of that 1959 animated classic is still strong. That is the vehicle where Maleficent is truly frightening. Here a bit of the edge has been removed, and you just get the feeling she will do anything to protect her hold over Aurora in a motherly kind of way. Jolie makes her sympathetic, even though she still schemes and perhaps isn’t subtle about it.

Jolie was born to play this role and she does it with relish in those stylish and outlandish costumes, a sight to die for (and some will). Pfeiffer gets to chew the scenery and do a lot of scheming herself, and it’s great fun to see the two play off each other, with sweet Aurora caught in the middle. The lovable faeries are back in the form of Imelda Staunton, Lesley Manville and Juno Temple. Lots of cute elves elevate the proceedings too. It is all very entertaining as far as it goes, predictable but still fun for families and just in time for Halloween. No doubt a number of Maleficents will be knocking at your door this year unless Disney’s merchandising suddenly disappears — not to worry about that.

Writers are Disney veteran Linda Woolverton, Noah Harpster, and Micah Fitzerman-Blue. Director Joachim Ronning has done an admirable job steering all this action into something coherent and expected. Producers are Jolie, Joe Roth and Duncan Henderson. Disney releases it Friday. Check out my video review at the link above with scenes from the film.

Do you plan to see Maleficent: Mistress of Evil? Let us know what you think. I say if you have kids, go.