Continue to Deadline SKIP AD
You will be redirected back to your article in seconds
Skip to main content
January 22, 2021 7:12am 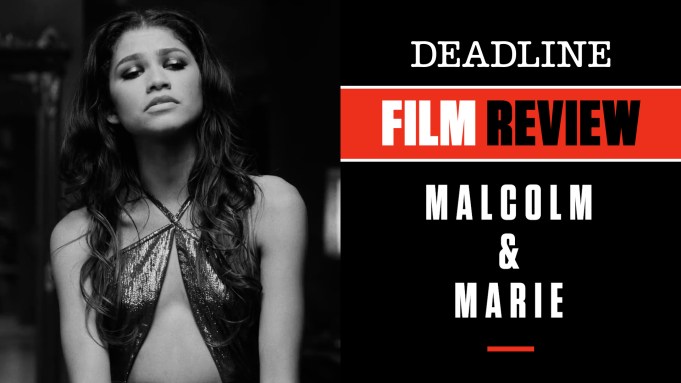 Many actors are known to count how many lines they have before signing on for a gig. In the case of Sam Levinson’s pandemic-created insta-movie Malcolm & Marie, I would imagine its two stars were counting monologues instead. This two-hour argument between John David Washington’s Malcolm, a self-absorbed hotshot film director, and Zendaya’s Marie, the significant other Malcolm forgot to thank at his film premiere, is a new age battle of the stars in which they don’t so much talk to but rather at each other in a series of dizzying monologue set pieces. Viewers are likely to find themselves changing sides back and forth, like you might after defense and prosecution closing arguments in a courtroom drama, or a heavyweight fight where both fighters are getting knocked down and then get back up from the mat. It’s exhausting, but the trip has some rewards if you want to stick it out.

Whatever you think of the film Levinson has written and directed in land-speed time, it likely will be mostly remembered as proof positive of great things to come from two emerging major actors. We really need no proof that Zendaya’s superb, Emmy-winning work in Levinson’s terrific HBO drama series Euphoria erased all memories that she was ever on Dancing With the Stars. And with his increasingly impressive work in the likes of Ballers, BlacKkKlansman and last year’s Tenet, there can be no question Washington has inherited dad Denzel’s talent. Both really get to show their considerable acting chops in a vehicle designed to do just that.

Levinson (son of director Barry) is a natural and came up with this film as an answer to having the second-season production start of Euphoria sidelined by Covid-19 shutdowns. With the understanding in April that they might be off until September at the earliest, he and Zendaya huddled and came up with the idea of doing a quickie movie project, one he would write for her. Thus Malcolm & Marie was born, Washington was cast opposite her, and virtually the entire key crew of Euphoria shuffled off to a Carmel, CA, location where the whole thing could be shot in one house. The modestly budgeted black-and-white indie sparked a bidding war in early fall and, as Deadline first reported at the time, sold for a huge $30 million to Netflix, immediately raising expectations this was going to be a major player for the streamer. If I were them, I might have waited until Venice 2021 to launch it, since it really is European in tone and probably could have built up more steam going that route. But, alas, it has been shoehorned into the current awards season where Netflix already has an abundance of riches. Can it stand out?

Washington and Zendaya both deliver, no question, but you have to wonder if in these dark and troubled times a movie with a lot of inside jokes aimed at the film business and a couple bickering about one of them forgetting to thank the other (a real-life situation that once happened to Levinson and his wife) is going to resonate. Plus there isn’t a moment you really aren’t aware these two fine actors are acting. Make no mistake, the long and winding road tells us much about their relationship and does take heavily dramatic turns, but it is a pretty exhausting ride, even if ultimately this is meant to be a love story of sorts. It seems the template is Edward Albee’s Who’s Afraid of Virginia Woolf? — specifically then-debuting film director Mike Nichols’ stunning black-and-white 1966 film version. This doesn’t reach those heights, but what could? I don’t think the filmmakers ever would presume to try to ape Albee’s biting and prodigious talent with words. In the sections where Malcolm and Marie actually are allowed to talk to each other, Levinson shows a real gift for conversation. I wish there was more, but when you are writing and shooting a project this fast, it is easier to let it flow in longer chunks of dialogue. Some of it is very funny, particularly film-savvy Malcolm’s frustration about Marie’s ignorance of William Wyler.

Marcell Rev’s exquisitely filmic Cassavetes-style black-and-white camera work gives it all a needed feel of cinema, but still it is difficult to not wonder if all of this might have been more effective onstage. It is very theatrical material at its core. Maybe down the line Zendaya and Washington could reunite in a live Broadway version — or better yet, how about both of them taking a whack at Virginia Woolf?

Producers are Kevin Turen, Ashley Levinson, Sam Levinson, Washington and Zendaya. Netflix begins streaming it on February 5. Check out my video review above with scenes from the film.

Do you plan to see Malcolm & Marie? Let us know what you think.