Continue to Deadline SKIP AD
You will be redirected back to your article in seconds
Skip to main content
June 10, 2020 12:12pm 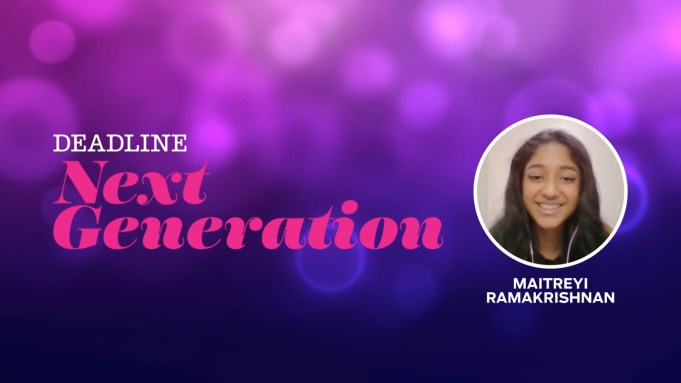 Never Have I Ever has been gaining plaudits since its April launch on Netflix for its accurate depiction of high school as well as its inclusivity and breaking South Asian stereotypes.

The series created by Mindy Kaling and Lang Fisher stars Maitreyi Ramakrishnan in her first role. She plays Devi Vishwakumar, a 15-year old from Sherman Oaks, CA, who wants to change her social status after a horrible year that included losing her father and being confined to a wheelchair for three months.

Ramakrishnan, who is 18, sat down to discuss how she got the role on Deadline’s video series Next Generation TV along with some of her goals going forward.

“The audition process was definitely unique, it was a journey in itself, it could be its own movie,” she said. After six self-taped videos, a screen test and chemistry test in Los Angeles, Ramakrishnan beat 15,000 hopefuls to the role. “When I got the ask to L.A. and do a screen test, I had to tell my parents ‘Hey, I just sent this random guy in LA videos of me acting and now they want to take me to L.A. so can I do that?’ After convincing them that this was a very real, legit thing and I’m not being scammed, they were all on board and they were super supportive.”

Ramakrishnan also discusses meeting Kaling for the first time as well as the similarities and differences between her and her character. She also talks about how the show helped break down racial stereotypes.

“I think it’s great that we have a story like Never Have I Ever but it’s depressing that this is happening in 2020 and even though we can applaud breaking stereotypes but we can’t forget that we still have so much work to do,” she said. “Devi is only one story. Hopefully as much as this show inspires other minorities around the world, it will also inspire directors, producers, creators, writers to start bringing that natural inclusion into their shows.”

Finally, Ramakrishnan reveals her love for Harry Potter’s Hermione Granger and her plans to focus on directing and producing in the future.