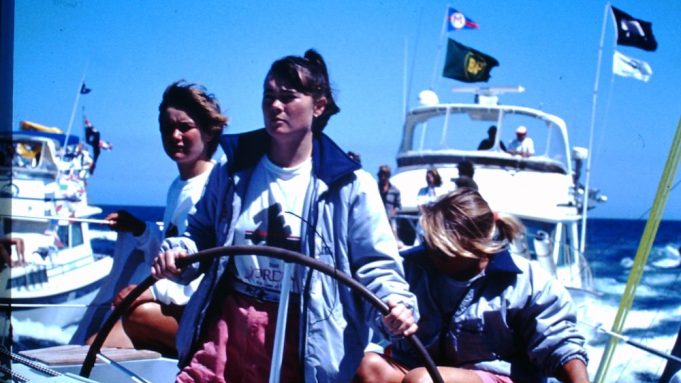 The Sony Pictures Classics documentary Maiden sailed into theaters in June and its impact continues to make waves with its message of female empowerment, not just in the yacht racing world, but across all industries and life.

Directed by Alex Holmes, Maiden (the name of the ship and main star of the film) tells the story of the first all-female crew to enter the Whitbread Round the World Race in 1989. With the trailblazing skipper Tracy Edwards leading the charge in the feature docu that premiered at the Toronto International Film Festival in 2018, the film is a journey for a group of women as they face naysayers and discrimination — something that is more than relevant today. During Deadline’s “For The Love Of Docs Screening Series”, Edwards and Holmes talked about the making of the film and how it was like for Holmes to revisit this groundbreaking moment in her life.

“When we watched it we were blown away by Alex’s amazing storytelling abilities,” said Edwards about the first time she watched it with her crew. “Every one of us thought that he told our story in a really honest way and a lot things were very difficult for me to listen to and I thought actually they were quite reserved.” She laughed and added, “I could have said a lot worse!”

Holmes said that Tracy’s impact in the sailing world resonates beyond that which is one of the main reasons he sought out to make the film. “Not only was Tracy a remarkable character and not only was her story incredibly inspiring, but I was shocked at the realization that all these years later, after Tracy has fought to dismantle the barriers that were put in her way when she tried to enter this race, that my daughter would face so many of the same barriers and that was a real shock to me and that is why this story isn’t just a great story,” he said. “It’s an important story and it needs to be told.”

For Edwards, she and her crew did not want to hold back with the truth. She wanted to tell the hardships of entering a space dominated by men who say “you can’t do this” or “you can’t do that.” At the same time, she wanted it to be real. “Let’s let women see that life is not perfect,” she said about the film. “Life is messy and it’s difficult and you can’t always look your best but you can get there if you keep going.”

Initially, Holmes wanted this to be a narrative feature because he thought there wasn’t any footage available. Luckily, Edwards told him that there were cameras on board with them the entire time.

“That was music to my ears bc documentaries are my first love,” said Holmes. “By the same token, I have worked in narrative feature and I think that instincts in that form storytelling inform the way I shape the narrative of this.”

Even so, Edwards said that it took two years to find the footage. Holmes said that they had to search all four corners of the world to find tapes that were discarded, deteriorated and analog — but luckily he was able to use it to tell this story of female empowerment.

Edwards points out that the story remains relevant because the discrimination they faced is still alive and well today — but she remains positive for change and she says the movie continues to fuel progress.

“There have been changes and women have made huge strides in that movement…I think the difference between 30 years ago and now is that men are part of this movement,” she said. “I am encouraged and heartened by the fact that men and women fight together for equality and injustice — well, intelligent men, obviously there are a few idiots out there that don’t.”

She continues, “I think young men of my daughter’s generation seem to be a lot surprised that women aren’t equal. I am heartened by that — but a lot of industries, we’re still battling patriarchy. It’s intersting, at 57, I’ve learned the difference between battling men and battling the patriarchy — we’re not battling men. The patriarhy — especially in the UK — is there and it’s layers thick. It’s centuries old. In my innocence 30 years ago I had no idea what we were up against. Now I know because I have a 19-year-old daughter and I don’t want her to go through any of these things again.”