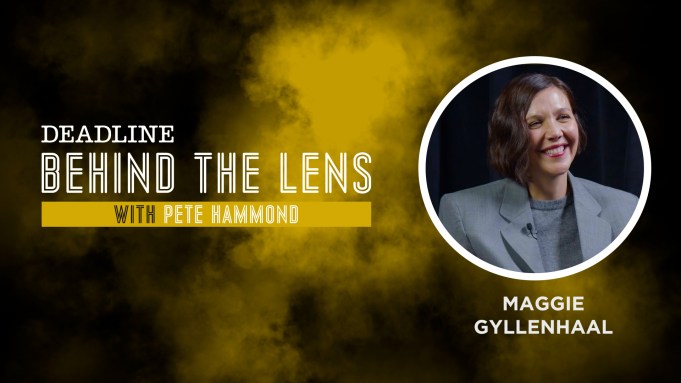 Maggie Gyllenhaal returns to our Deadline studios today for my video series, Behind The Lens to discuss her feature film writing and directing debut The Lost Daughter which has already won her awards from Venice where it had its World Premiere, the Gothams which it swept, the New York Film Critics Circle and many more accolades. Previously when she was starring in , and serving as a producer , on the HBO series The Deuce she was a guest on my other Deadline video series, The Actor’s Side which of course made perfect sense because acting is what we have always known this exceptionally talented star for in the first place. But with this new film, opening in select theatres today and then streaming on Netflix starting December 31, she has gone to the other side of the camera and tells me of the experience, “I feel like I was always a director”.  She also says though that she didn’t feel “entitled” to really believe she could take it on in addtion to what the industry already knows about this artist who seems to have been born into the business. Her mother Naomi Foner is a celebrated Oscar nominated screenwriter, her father Stephen Gyllenhaal a veteran director, her brother Jake an actor. But when I say it was inevitable she would also take this path, she disagrees. It is a fascinating, thoughtful conversation we have and it goes in interesting places, including her raw and honest reaction to an interview that had just appeared with Elena Ferrante , author of the book Gyllenhaal’s film is based on, where she lavishes praise on the filmmaker and goes into detail on this screen adaptation of the author’s work.  This is a movie about what it means to be a woman, and especially a mother and that is what attracted Gyllenhaal to taking it all on in the first place. She discusses the sheer complexity of it all, working with Olivia Colman and the very fine ensemble cast, and how the whole opportunity of making The Lost Daughter has really informed her career going forward. To watch our conversation just click on the link above.

Join me every Friday during Oscar season for another edition of Behind The Lens.