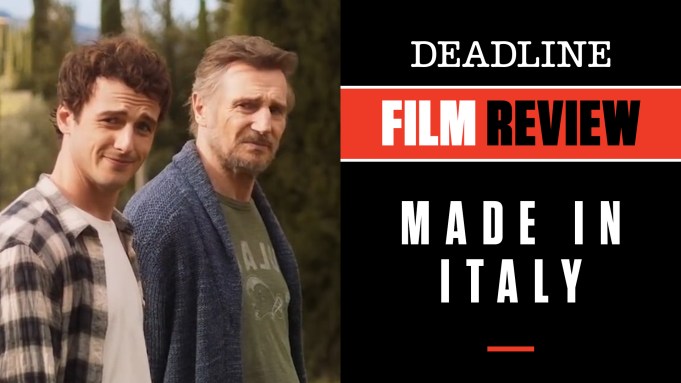 The new family dramedy Made In Italy seems made to order for stars Liam Neeson and his own real-life son Micheál Richardson. But in fact this feature debut from writer-director James D’Arcy has actually been in development for a decade and survived several different scenarios before finally landing the father-son acting pair to play a fictional father, Robert, and son, Jack, out to make a quick sale on the Tuscany home they inherited from Robert’s late wife.

Actually at one time D’Arcy, also a well-established actor, had envisioned the role of Jack for himself, but eventually he became too old to play him. As luck would have it, Richardson turns out to be perfect, even if he might be slightly too young for a man on the verge of divorce trying to reignite his life by getting money to open a gallery, and having to reunite with his Bohemian artist father to do it. The real-life parallel is of course the sad fact that Neeson’s wife and Richardson’s mother, actress Natasha Richardson, died tragically after a skiing accident 10 years ago — ironically about the same time D’arcy started to write his script. The two events were not related but now are poignantly joined as you watch Neeson and his son bring these characters to life.

In the case of Made In Italy a third key character is Tuscany itself, and the small village of Monticchiello, which makes this film seem perfectly timed as it serves as close to a vacation many will get during this coronavirus pandemic. It is a gorgeous setting for this touching and often quite amusing and funny human story as father and son face a major restoration project in bringing the home, one that had happy memories for Robert, back to glory while they also try to restore their own fractured relationship.

Neeson thankfully doesn’t have to battle the bad guys in this one and nicely trades his action-star credentials for some fine and surprisingly sharp comedic chops, playing an offbeat guy who isn’t up for any Father of the Year awards but still shows some delayed promise in that area as he and Jack spend this family time finally getting a chance to heal after losing a woman so close to both. It is essentially a love story, but one about a parent and child who have drifted apart. In tough, dark times, this storyline along with the irresistible scenery offers hope and a feel-good time at the movies, even if the “movies” in this case is your own living room. That’s where this lovely film will be available on VOD beginning Friday from IFC Films, the indie distributor that has been taking up the slack this summer from the usually bustling theatrical marketplace. This is another winner for them, simple yet moving for a much-needed escape.

Neeson is excellent and I really wish he would expand his filmography to include more roles like this one. Richardson’s casting is not due to nepotism since the actor’s oldest son (he’s now 25) has genuine on-camera charisma and charm, not to mention natural chemistry with dear old dad, which isn’t easy to pull off believably on screen in many instances. In addition to the two stars, there are sweet moments from Valeria Biello as a local chef who provides a new romantic interest for Jack despite lingering problems with her own ex, and from veteran Lindsay Duncan as an ex-pat now in the real estate game who drops in to help get the house together for a potential quick sale.

In short, Made In Italy proves to be just the ticket for those looking for a little fun and respite from their own lives, while maybe offering a nice preview of a future travel destination once you fall in love all over again with the wonders of the Tuscan sun.

Check out my video review above with scenes from the film. Do you plan to see Made In Italy? Let us know what you think.