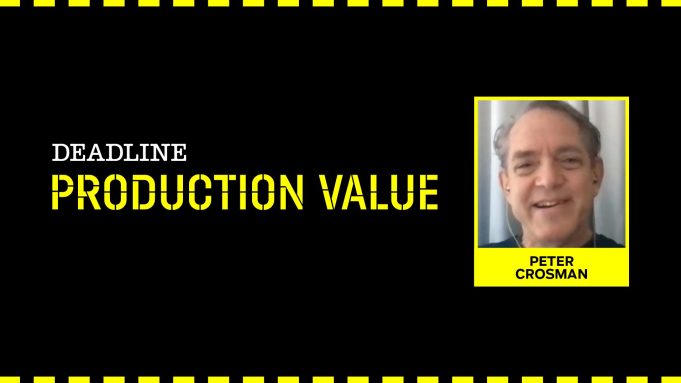 When VFX supervisor Peter Crosman boarded Made for Love, he found the kind of “puzzle” he’s always looking for in his work.

For HBO Max’s dark comedy, examining a world of dystopian tech, he’d need to help give visual form to a futuristic campus known as The Hub, as well as the sentient dolphin that resides in its swimming pool.

Comprised of interlocking virtual reality cubes, The Hub was devised by tech billionaire Byron Gogol (Billy Magnussen) as an oasis, fully removed from the real world and all of its imperfections. While the desert campus is heaven for Gogol, it proves to be hell for his wife Hazel (Cristin Milioti). In the course of Made for Love’s first season, she flees from her suffocating marriage within this totally curated environment, only to find that Gogol has implanted a revolutionary monitoring device in her brain, which is tracking her every move.

As Crosman notes in the latest installment of Production Value, The Hub was “absolutely the brainchild” of Alissa Nutting, who exec produces the series and wrote the novel on which it’s based. It was production designer Jordan Ferrer, though, who laid out visual concepts that the VFX team could work from, as they augmented this key environment.

“We knew we needed to address all these simulations, and develop a language, a syntax for the aerial projections, and the doorways that open, and where to pull back the curtain and show the interstices of the projection cube environment, and where not to,” Crosman says, of VFX work done on The Hub. “[All of that] was something that was riding along with the production all the time, but we didn’t have to make those final decisions until post.”

Ultimately, it was Toronto’s Marz VFX that would flesh out The Hub, based on 3D assets provided by Ferrer and his team. The show’s photorealistic dolphin, Zelda, was created in concert with Olcun Tan and his team at Gradient Effects.

The stakes, in bringing Zelda to the screen, couldn’t have been higher. “Zelda is a cast member, so that was indeed a very big burden to consider having to get perfect,” Crosman says. “No matter what anything else looked like in the course of the show, it was obviously going to have to be a character that was flawless in every way.”

Given the fact that Gradient Effects had no “model dolphin” to work from, Zelda would have to be created from scratch. “[But] once I spoke to Olcun about that, we were convinced it was probably better that we didn’t have some other model of dolphin, that we would do this uniquely,” the VFX supervisor notes, “that we would build what had to be the Gisele Bündchen, beautiful, graceful dolphin that the showrunners wanted.”

From Crosman’s perspective, Zelda was “the toughest thing” to create for Season 1, “in terms of rendering and accuracy.” Still, he knew he and his collaborators had succeeded in their mission when PETA reached out. “The director’s agency was called after the show aired to ask whether a real dolphin was ever used in the show, so we’ll take that as a compliment,” he says with a smile. “Maybe mission accomplished.”

During his appearance on Production Value, Crosman breaks down his entire entertainment trajectory, touching on his early experiences working as an animation assistant on classic children’s programs, including Sesame Street, as well as his time at Industrial Light & Magic.

At ILM, he got to work, as an animator, on a number of classic franchises, from Back to the Future to Star Trek and Indiana Jones. “That was an amazing community. I was so blessed to have the animation department as my mini home away from home because we really did live there seven days a week, often,” Crosman recalls. “The work was hard. It was very taxing, and the people were amazing at what they did. I definitely loved being there for that particular learning experience.”

Crosman also touches on his big break as a VFX supervisor, with the 1995 film Tank Girl, and the challenges that make his job so exciting. “Every show has its kernel of concentrated problems that…you’re going to gradually untangle, until they can be parsed and assigned and all come together into this post process,” he says. “I just can’t get past the idea that I want to be the person for that problem solving, and I want to see the result. I want to be in that dark theater when we basically do something impossible that people get to see.”

Check out our entire conversation with the Emmy-nominated VFX supervisor by clicking on the video above.