Continue to Deadline SKIP AD
You will be redirected back to your article in seconds
Skip to main content
May 29, 2019 5:37pm
1Comments 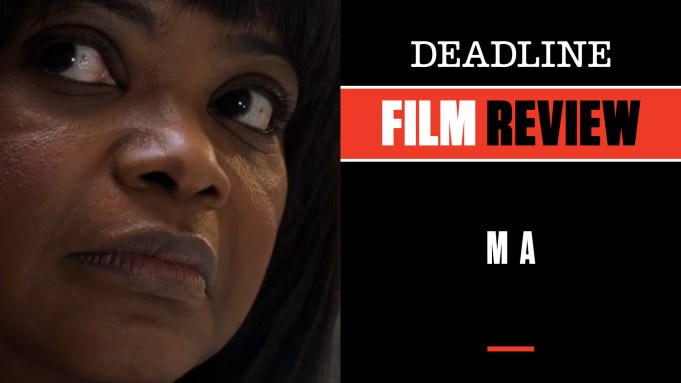 Next time your teenage kids want to throw a party, make sure they don’t invite Octavia Spencer.

The Oscar-winning star reunites with her The Help director Tate Taylor for Ma, the latest opus from Blumhouse. And she thoroughly creeped me out as a small-town veterinary assistant who befriends a group of local teens by buying them a lot of liquor and then inviting them to come party at her place, “but don’t ever go upstairs,” she asserts. Spencer is all in as Sue Ann, nicknamed “Ma,” who seems normal enough when she engages with a clique of high schoolers including Maggie (Diana Silvers), a newcomer to town. Under age, they persuade Sue Ann to buy some booze for them, and she in turn invites them to use the large basement area of her home for their wild partying.

In no time, Ma joins in on the fun, though after a brief sojourn to find an upstairs bathroom, Maggie and her friend discover a strange vibe and start to think maybe Ma is more than she seems on the surface. Flashbacks to her own high school days reveal that Sue Ann was an outsider, eventually humiliated by some of the students who are all now adults in the same town they grew up in. It turns out that Ma may know more about some of the teens she is hanging out with, including the fact that some of them are offspring of the very mean students she went to school with all those years ago. Is revenge in store?

Taylor, working from a Scotty Landes script, lets it all play out and flow nicely before the inevitable bloodletting begins and all hell breaks loose. The script itself has some wide-open holes in it — why do these kids keep coming back for more? — but as a vehicle for the wonderful Spencer in her first leading film role, it totally delivers the goods, letting this great actress create the freakiest villain this side of Kathy Bates in Misery, the character she most reminds me of. There’s a bit of Carrie in there too, but this isn’t a Stephen King creation by any means. Spencer makes Sue Ann/Ma a worthy successor for this type of slow-burning horror.

I often say the best acting is done with the eyes, and in Spencer’s case the eyes tell it all. There is a psycho somewhere behind them just waiting to climb out and wreak havoc. As with all the best characters like these, we are given license to care and understand where Sue Ann’s motivations are coming from. Overall this is another low-budget Blumhouse concoction that works beautifully on its own terms and proves to be a lot of fun.

Although this largely ia a one-woman show, the supporting cast does well including Luke Evans, Missy Pyle and Juliette Lewis as Sue Ann’s older former classmates. Lewis character is Maggie’s mother, and dealing with her own past associations in this town she now reluctantly comes back to with her daughter. Also doing what is needed are the well-scrubbed, mostly white teens who endure a lot. Producers are Jason Blum, John Norris, and Taylor. Spencer’s The Help co-star Allison Janney appears briefly as Sue Ann’s boss, which she likely did as a fun favor for friends. Universal release Ma on Friday. Check out my video review above, which includes scenes from the film.

Do you plan to see Ma? Let us know what you think.