Anne Heche “Not Expected To Survive” After Severe Brain Injury From Car Crash, Will Be Taken Off Life Support
Read the full story
November 20, 2020 9:14am 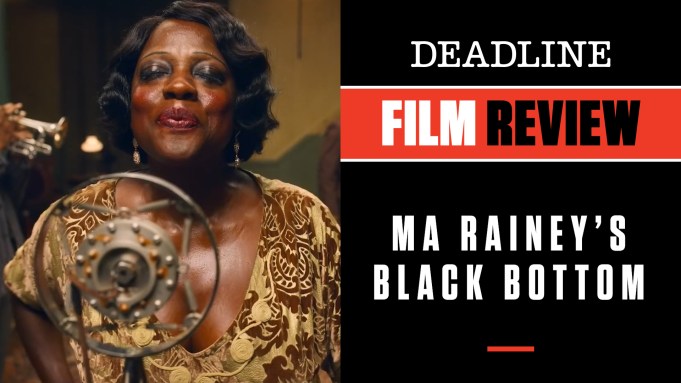 If Ma Rainey’s Black Bottom indeed is the final film of the late Chadwick Boseman‘s career, he is going out the way he came in: as an actor of unquestionable talent and power. And to see him teamed with Viola Davis in this film version of the first of August Wilson’s 10-play “Century Cycle” is to watch two greats at the top of their game.

Producer Denzel Washington has promised to get all those remaining unfilmed plays turned into movies, and Ma Rainey’s Black Bottom — the only one set outside Pittsburgh — is a promising way to start. He directed and starred in the 2018 film version of Wilson’s Pulitzer- and Tony-winning Fences, for which co-star Davis won both a Tony and an Oscar. She definitely will be in contention again for playing the larger-than-life diva-like “Mother of the Blues.” The story is set in a Chicago recording studio circa 1927, where Ma Rainey has come from her Southern roots and comfort zone to record an album for a label run by white producers. She is at odds with them right from the beginning, wanting to bring her own signature style and successful blues career to a different part of the country in a changing time where others are emerging to take her mantle of queen of this kind of music. She takes no prisoners, and certainly isn’t all that likable, but she knows what she wants and insists that she get it her way. But her era is becoming a thing of the past.

Soon white performers would be taking the songs and sound of the Ma Raineys and turning them into hits of their own, and this play-turned-movie (Broadway vet George C. Wolfe directs the adaptation written by Ruben Santiago Hudson) flirts with the beginning of that sad trend, particularly at the end. But the focus is on the star and her relationship with her band, most notably Levee (Boseman), an ambitious dreamer of a trumpet player who also has eyes for Ma’s girlfriend Dussie Mae (Taylour Paige), for whom she has some sort of erotic attraction. As mentioned, Ma also is at odds with her bosses as she insists on using her stuttering, piano-playing nephew Sylvester (Dusan Brown) to introduce the first track on the album, not an easy task as it turns out. She also throws snit fits such as refusing to perform without “my Coca-Cola,” in a product-placement moment that is born out of a pure dramatic need.

As in any Wilson play, there are long monologues, and the beneficiary here is Boseman, who has one humdinger about his mother that the actor socks home like there is no tomorrow. Despite the title character (“Black Bottom” is a reference to one of her hits), the real dramatic center belongs to Levee, and his own shortcomings lead this down a tragic path. The actor was born to play this, and despite the real-life tragedy of his untimely death from cancer this year, it is a gift to filmgoers that he got to play it.

Davis is astounding, completely enveloping herself in the guise of Ma Rainey — thick eyelashes and well-toned cleavage among her physical attributes. She has the physical stance of this legend down perfectly, and though she doesn’t do her own singing, for the most part (another singer was hired, and she augments), she expertly gets the essences of Ma Rainey as if it was Davis’ own vocals. (She does have one number, though, that is pure Davis). It is another fine performance in the long line of them that Davis has been amassing.

The band makes up the rest of a thoroughly effective ensemble, including excellent turns from Colman Domingo as Cutler, Michael Potts as Slow Drag and especially Glynn Turman as Toleda. Jonny Coyne and Jeremy Shamos are equally fine as the white management butting heads with Ma. Wolfe also has assembled a talented team behind the scenes that delivers strong production values, and thankfully he keeps this from feeling like a filmed play instead finding a cinematic heart beating inside the material.

In addition to Washington, producers are Todd Black and Dany Wolf. Netflix begins streaming it globally December 18. Check out my video review with scenes from the movie at the link above.

Do you plan to see Ma Rainey’s Black Bottom? Let us know what you think.