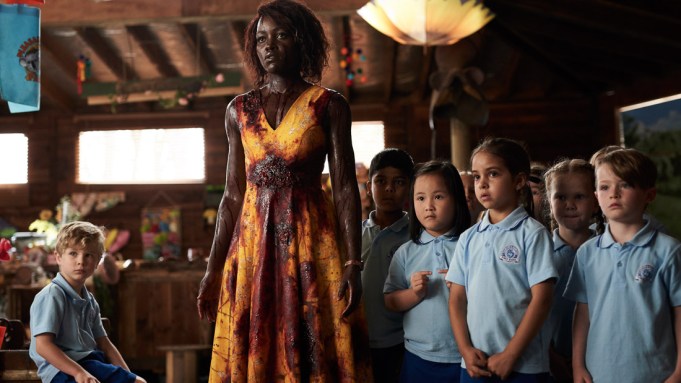 At a time in Hollywood when major studio comedies have run out of gas at the B.O. with the genre’s creators increasingly fleeing to Netflix, the town should take a look at Australian filmmaker Abe Forsythe’s zany Sundance Film Festival romp Little Monsters as the next evolution of comedy.

Eight hours after the film made its midnight premiere at the Library Centre Theatre, Deadline exclusively reported that NEON and Hulu had scooped up U.S. rights to the zombie comedy for mid-seven figures.

The movie, which is billed as Zombieland meets Kindergarten Cop, played like gangbusters last night with uproarious laughs. The pic is equally romantic and gross-out comedy, zombie chase pic with a rhythmic, pungent sense of humor that doesn’t let up. At the center of it all, and taking the movie to an entirely different level is Lupita Nyong’o as a kindergarten teacher, showing a comedic facet we haven’t seen before, complete with her playing ukulele covers of Taylor Swift songs. Little Monsters is a breath of fresh air at a time when it feels like the majors are still making the same types of comedies from 15 years ago.

Extols Josh Gad, who plays a bitter, yet successful Wiggles-like kids TV talk show host in the film, “the thing that is so refreshing while watching this movie, and angering, is that Lupita can literally do anything. It upsets me because I can do almost nothing. But, the revelation of the movie, is this presence of Lupita coming in and doing a completely different character from what we’ve ever seen her do.”

Nyong’o was unable to be at the premiere last night since she was at the SAG awards where she shared a best cast feature ensemble win for Black Panther. She arrived at Sundance today to do press on Little Monsters, but unfortunately lost her voice.

Quipped Gad, “She chose to come to Sundance without a voice, which was another bold Lupita Nyong’o choice; she only makes bold choices.”

In Little Monsters, Alexander England stars as Dave, a ne’er-do-well who plays heavy metal rock songs on the street in the wake of his band breaking up. He’s failed at his relationship with his yuppie girlfriend and goes to live with his sister and her five-year old son who has a food allergy. He volunteers to join his nephew’s kindergarten class field trip to a petting-zoo in an effort to get close to the class teacher, Miss Caroline (Nyong’o). The park is unexpectedly attacked by zombies, and the group has to defend itself alongside Gad’s selfish TV talk show host.

Forsythe says the movie “was based on a very personal experience, putting my son into kindergarten; it started from a place of truth.” At the premiere last night the filmmaker also mentioned that the movie was a love letter to kindergarten teachers, who he sees as the real superheroes.

“It was important for me to create a dichotomy of the way a child sees the world, and the way adults see the world,” says the filmmaker, “That’s when the extremes happened.”

Gad called the script “unbelievably funny” after he first read it, yet “a little dangerous and tricky to pull off. This is the kind of things we should be doing.”