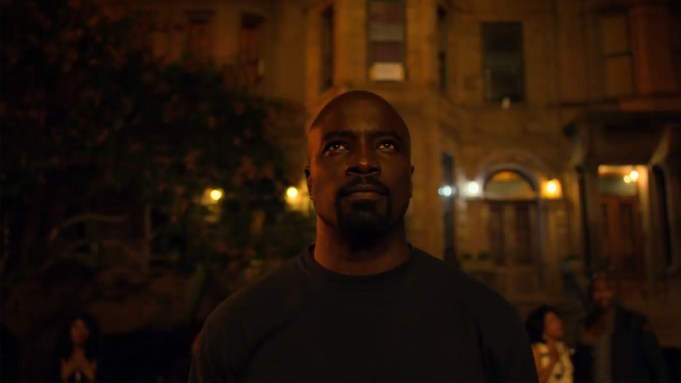 The launch of Season 1 of Marvel’s Luke Cage in 2016 crashed Netflix. The June 22-debuting second season may or may not repeat that feat, but it sure packs a lot more punch.

I was a big fan of the first cycle of the Cheo Hodari Coker-run and Mike Colter-led Harlem hero series, but there’s no argument things went a little sideways towards the end of Season 1. This time around, former music journalist and Ray Donovan co-EP Coker has listened to his ear for knowing it is often the notes between the notes that make a song sing. The result is that in Luke Cage Season 2, many voices are lifted up because of that, as I say in my video review above.

For one thing, having gotten over giving the bulletproof guardian of Harlem his own realm after an introduction in Jessica Jones, which by the way had a pretty great second season too, and that The Defenders stint last summer, Season 2 of Cage sets itself firmly in the legendary NYC neighborhood that was once home to Maya Angelou, Joe Louis, Q-Tip, and Zora Neale Hurston, among others. To that end, Harlem is a distinct character unto itself in Cage Season 2 with its rhythms, legacy and challenges.

Which means from the barbershop to the cop shop to the back alleys and the clubs, this series is jumping.

There is an even more exceptional than usual performance from Alfre Woodard as main villain Mariah Dillard, way more of Simone Missick’s now enhanced Misty Knight, and Colter digging deep to find artistic treasures. In fact, with a great new foe in the form of Mustafa Shakir’s Bushmaster, his 13-episode run is not just one of the best superhero tales around but one of the best told stories out there period on either the small or big screen right now.

Hitting the soundtrack drum hard again, there are all-killer no-filler tunes this season with an original score by Adrian Younge and Tribe Called Quest’s Ali Shaheed Muhammad. Weaved in with soul, reggae and hip-hop classics, the series even has new tune by the Rap God himself Rakim, which seals the deal.

Check out my video review of Marvel’s Luke Cage Season 2 above. And let me add, if Netflix crashes this season like it did for Season 1, keep hitting refresh – it’s totally worth it.

This review originally ran on June 15