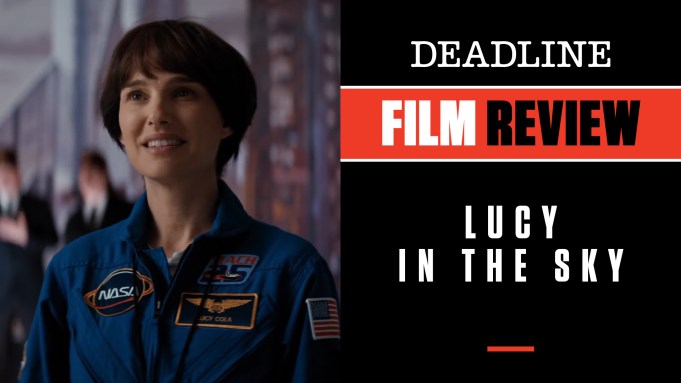 Let’s call Noah Hawley’s feature directorial debut, Lucy in the Sky, something of a space oddity, even if it supposedly is inspired by true events. That is because it is partially based on NASA astronaut Lisa Nowak, but the names have been changed and there is no diaper reference to be found.

Nowak was arrested in 2007 after stalking and confronting the new girlfriend of a fellow astronaut she reportedly was having an affair with. Nowak has since denied the widely reported story that she was wearing adult diapers so that she would not have to stop to relieve herself during the intense cross-country drive to get her act of revenge. The diaper part is left out of the film, as are the real names. But the rest is pretty much intact, making this something like Gravity or  2001: A Space Odyssey meets Fatal Attraction.

Natalie Portman, no stranger to playing disturbed women (i.e., her Oscar-winning turn in Black Swan), here plays Lucy Cola, an astronaut who can’t get over the thrill of her time on the Space Shuttle, to the point it affects her personal life when she returns and immediately wants to just sign up and go back. Her life somehow changed up there and so, from her POV, did her relationship with a loving husband and father, Drew (Dan Stevens) who also works at NASA, but can’t understand what has happened to Lucy and their marriage. So drawn to the NASA world, Lucy even embarks on an affair with a fellow astronaut, a bit of a womanizer named Mark (nicely played by Jon Hamm), whom she feels she has more in common with now. However, when she discovers he has taken up with yet another colleague (Zazie Beetz), she targets the pair with her wrath and takes off in a mad rage to San Diego, where she learns they have gone. It is there she gets her full Glenn Close on, and a movie that started as cerebral as Ad Astra now goes full-tilt into melodrama, with “I love Lucy” not a phrase anyone feels the need to utter.

Originally developed for Reese Witherspoon (who maintains a producing credit), you have to hand it to Portman for diving right in and taking no prisoners, particularly in her wild confrontation scene. Complete with southern accent, which you get used to after a while, Portman proves unquestionably to have the right stuff to play a woman who undeniably has the wrong stuff for her chosen profession. Portman is worth the price of admission, even if you wish she had gone for the diapers, too, and it is her show all the way. Stevens does what he can with the nice guy hubby role, and Hamm is just right as the guy Lucy falls for. Ellen Burstyn is always a welcome presence these days, and has a few moments as the salty grandmother.

Still Hawley, creator of the TV version of Fargo, can’t quite keep the tone straight, as the movie delves into its high dramatics and gets even a bit campy at times. The screenplay is credited to Brian C. Brown and Elliott D. Guiseppi, along with Hawley. It is a tough nut to crack, but not deserving completely of the critical brickbats the movie took after its Toronto Film Festival premiere last month. If you forgive its shortcomings, including the annoying game of aspect ratio shifting Hawley indulges in, Lucy in the Sky can be its own guilty pleasure, however unlikely it is to show up at the Oscars.

Producers, in addition to Hawley and Witherspoon, are Bruna Papandrea and John Cameron. Fox Searchlight opens the film in limited release Friday through Disney. Check out my video review at the link above with scenes from the film.

Do you plan to see Lucy in the Sky? Let us know what you think.