Continue to Deadline SKIP AD
You will be redirected back to your article in seconds
Skip to main content
August 3, 2022 6:00am 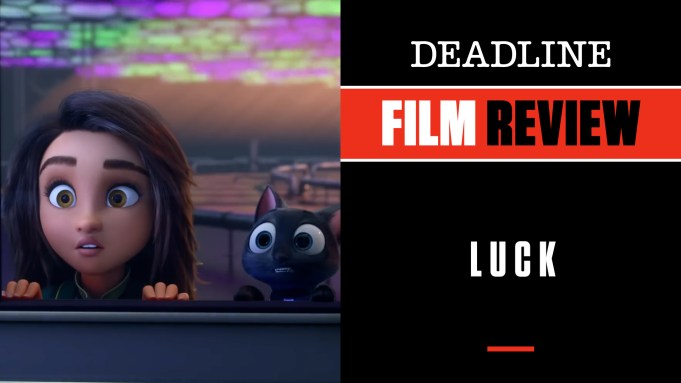 After being ousted by Disney/Pixar, John Lasseter, the man many credited with that studio’s resurgence as an animation powerhouse, is back in luck with the appropriately titled Luck, his first venture into feature film animation as head of Skydance’s toon division. He is a producer on the new film, which starts streaming Friday as an Apple Original Film on Apple TV+.

Filled with the familiar Lasseter tropes of strikingly good animation, strong characters, and a blend of comedy, emotion and heart, this movie could be a lucky charm for both Apple and Skydance. It checks all the boxes except a theatrical run, where it might have done well if released outside of the current summer glut of family fare. Nevertheless, it ought to find a receptive audience at home.

The plot centers on 18-year-old Sam Greenfield (voiced by Eva Noblezada), a plucky young lady who just may be the unluckiest person in the world, or so she thinks, as nothing appears to have gone right for her beginning with her endless travels through foster homes, never once finding that “forever” one, but now focused on making sure the same bad fate doesn’t come upon her young friend Hazel (Adelynn Spoon).

One day she stumbles upon a mysterious cat with a so-called lucky penny she gets and notices immediately its effect on reversing things for her — that is until she manages to lose it. But as luck would have it she does track down that elusive cat who it turns out can talk. His name is Bob (Simon Pegg) with a nice Scottish brogue, and she spots him in the street going down some sort of magical hole that opens up. She follows him and soon finds herself with Bob in a colorful Land Of Luck — no humans allowed.

This is a place run by the no-nonsense Captain (Whoopi Goldberg) and royally presided over by Dragon (Jane Fonda), the elegant leader of the land who does not permit any human interference into this magical place where animals, creatures and leprechauns co-exist. Desperate to find another lucky penny, both Sam and Bob have their reasons for joining forces and avoiding a trip to the dreaded Land of Bad Luck run by its Mayor (John Ratzenberg). With the help of a willing leprechaun named Gerry (Colin O’Donohue), they set out to keep Sam’s human form hidden and off on a course to find another penny.

With lovely animation and a sweet script by Kiel Murray (who wrote Pixar’s Cars, directed by Lasseter), director Peggy Holmes captures just the right tone that kids will eat up and won’t bore their parents. The visuals are luscious, the John Debney score atmospheric, and the voice cast led by Noblezada and a terrific Pegg perfectly chosen. Fonda is just right as the warmhearted but human-fearing Dragon, and there is other nice supporting work from Lil Rel Howery as Sam’s boss Marvin back in the real world.

What makes Luck work ultimately is the relationship Sam forges with Bob, one that gives this charmer its heart and soul.

In addition to Lasseter, producers are David Ellison, Dana Goldberg and David Eisenmann.

Check out my video review above with scenes from the film. Do you plan to see Luck? Let us know what you think