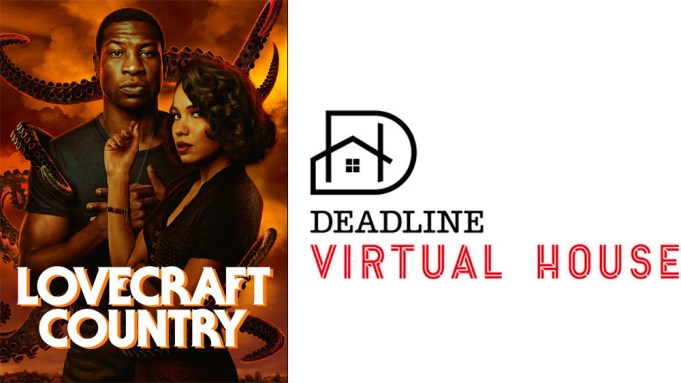 HBO’s Lovecraft Country made quite a splash critically, most recently when it was nominated for a whopping 18 Emmys. Even though the series based on the Matt Ruff novel won’t be continuing after just this one season, it definitely has left a strong impression as evidenced by all those nominations. It is perhaps the most unusual of all Emmy Drama Series contenders, a genre-tripping show that crosses sci-fi with horror, drama, socially conscious issues and so much more.

The show is anchored in 1950s America but isn’t tied to any one era or location as it not only is wildly entertaining but has much to say about racism and the state of our country then — and now. On Thursday night, the Deadline Virtual House took a deep dive into the making of show with the artisans and actors who made it happen. Divided into three panels, the first explored the “sounds” of the show with composers Laura Karpman and Raphael Saadiq, who explained their unique relationship in working together to create the music. Music supervisor Liza Richardson explained how she chose songs and other musical elements that weren’t married to the period necessarily but encompassed everything from tunes from Josephine Baker to the ’50s to Rhianna and back again. Sound supervisor Tim Kimmel explained the unique nature of an assignment that felt like 10 distinct movies in one.

Panel No. 2 explored the “sights” of Lovecraft Country, with Dayna Pink telling how being costume designer on a show that crosses so many movie genres was rewarding and challenging, not the nightmare job it might look like on paper. VFX supervisor Kevin Blank, director of photography Tat Radcliffe and special makeup effects artist J. Anthony Kosar all discussed the wide scope of their work on the show, which has resulted in Emmy nominations for all of them.

In addition to those eight crafts Emmy nominees, in Panel No. 3 showrunner, EP, writer and director Misha Green explained just why she would want to take on such a big\-scale drama series and still bring it in on budget for HBO despite all those expensive production values. “Matt Ruff’s book is an amazing book. You know, it already had kind of this episodic TV feel because he had written it for TV as a TV pitch before he actually wrote it as a book because no one would make it at the time,” she told me. “So it was just easy to take this kind of beautiful book, this beautiful platform, and launch off of it and go crazy and tell all these different stories in the genre space and getting to see all of these beautiful faces that I get to see right now, and to take these characters to new heights.”

Of course, she had a remarkable cast of actors to help her do that, and included on our panel were five of them — all Emmy nominees this year for their work. Among them is Jonathan Majors, who plays Atticus Freeman and is nominated for Lead Actor in a Drama Series. He compared it to the Olympics. “In acting, you’re doing all these different elements,” he said. “You’re pushing your body, your instruments to the limit. At least I thought that was the case until I signed on for, I think, nine and a half months of Lovecraft Country, which was apparently that for the entire time, you know. I think everyone here can attest to it, it was very gladiatorial about being a member of the Lovecraft Country cast. It was what it is like to be an Olympian emotionally, physically, et cetera. And we had a coach, and that was Misha.”

For Jurnee Smollett, up for Lead Actress in a Drama Series as Leti, it meant going to places most acting jobs don’t allow you to go. “Our heroes are on a quest to restore balance late in their world,” she said. “However, when you place Black folks in the center of a classic story, and you make it very specific and unique to our experience, it becomes a whole different ballgame, right? And that just was so disruptive to me on so many levels, and so exciting on so many levels.”

Michael Kenneth Williams, nominated for Supporting Actor in a Drama Series, his role as the father of Atticus was as complex as any he has had, and he had to be innovative in his approach to playing him. “I didn’t go in with any preconceived notions. I went in very open,” he said. “I got out of my way. I had never seen any writing like this that Misha had put together. I couldn’t really rely on my old ways of doing things to bring this to life. I had to kind of try something new and remain very open and not get in my own way to find him, and the gift that I got in return was I got some life lessons from taking the journey of Montrose Freeman, some life lessons that I am still sorting through today.”

Aunjanue Ellis, up for Supporting Actress in a Drama Series as Hippolyta, really got to play the gamut of situations. “You know, the thing about Lovecraft is that it went beyond all of our dreams,” she said. “I mean, that is what’s so exciting about it. It’s like, OK, here’s your dream. We’re about to smash that, you know, to something else. Certainly, I had never dreamed about doing that.”

For Courtney B. Vance, nominated for Guest Actor in a Drama Series, his time onscreen was limited, but he made a big impact, and the show made even a bigger impact on him. “Well, we just heard everyone talk, you know, about what the show means. The show is much bigger than anything I’ve ever seen on television before,” he said. “I mean, you don’t see a show start in 1950s, late to mid-1950s, South Chicago, going down south, and end up in space. I mean, you end up in Tulsa. So it’s revolutionary television. It’s unlike anything that any of us have ever seen before, and I played a wonderful, small part in it. I actually started watching [the episodes], I was completely fan-ish. I was a fan. I was just an audience member. I was just sitting there. I did not want it to end.”

To watch highlights of our Virtual House on Lovecraft Country, just click on the link above.