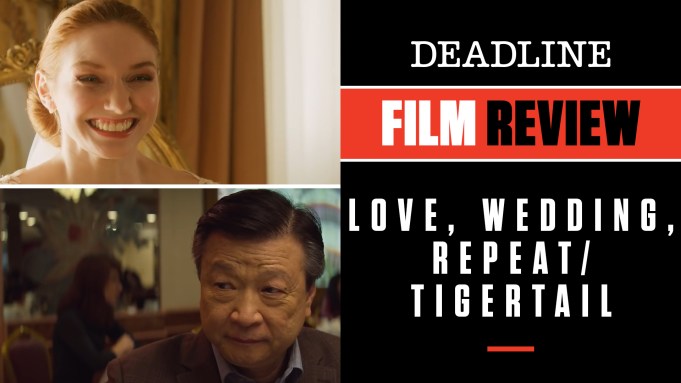 Netflix never seems to stop churning out the movies, and as today’s debuts show that can mean a mixed bag. The streamer is unveiling three films on the service Friday including a WWE-oriented kids flick called The Main Event that was not previewed. I am combining the other two, Love, Wedding, Repeat and Tigertail, for this review.

When I saw the marketing materials for Love, Wedding, Repeat, I was actually intrigued. It has an appealing cast led by Sam Claflin, Olivia Munn and Frieda Pinto among others in an amusing,  Groundhog Day-like tale. Claflin (The Hunger Games, Me Before You) plays Jack, a hopeless romantic who is about to make the move on a dream girl, Dina (Munn), but is interrupted at a key moment, and the opportunity for what he believes is true love slips through his fingers. Cut to three years later and he is at the wedding of his sister Hayley (Eleanor Tomlinson) where lo and behold Dina is actually a guest. Can the past be rectified? Can he turn it all around in a moment where fate possibly intervenes?

The gimmick here is that Jack is magically forced to relive alternate versions of events that day — different scenarios with disastrous results for the most part as an unwanted guest, a sleeping sedative, an unforgiving ex-girlfriend, and of course the other one who got away all collide in different ways. I suppose this could have worked, and maybe it did in the 2012 film Plan de Table on which it is based. I didn’t see that one, but what Love, Wedding, Repeat writer-director Dean Craig has concocted is like watching a wobbly multi-tiered wedding cake crumble before our eyes.

Maybe the fact this is a UK-Italian production based on a French-Belgian film means something somehow was lost in translation. The comedy is so forced here it is painful to watch. The cast is attractive but not made up of comic talent that might have been able to supersede the script and pull this off. If they could live an alternate version of their decision to do this film, I would urge all of them to call their agents and get cut out of it.

Craig deftly wrote two successful versions of his similarly farcical Death at a Funeral, but trying to transfer someone else’s material — in this case Francis Nief’s — plus direct a feature for the first time seems to elude him. The tone is all off, making the fantastical premise a non-starter. The gorgeous Roman locations at the beginning give way to a housebound setting in the large estate where the wedding and film is set, and the “Repeat” part of it all never takes off in any convincing way, leading to a predictable ending full of clichéd tropes of many a better romantic comedy.  Four Wedding and a Funeral, perhaps the template here, this is sadly not.

Joel Fry, so good as the best friend in Yesterday, struggles in a similar role here. Jack Farthing as Mark, who never got over his school infatuation with the bride and decides the crash the wedding, wanders around like he is lost in space. Pinto is completely wasted, as is Aisling Bea. I always try to find something to recommend, so let me just say the musical score is pretty good.

Fortunately, Netflix is also premiering Tigertail, a small, heartfelt and personal drama from writer-director Alan Yang, the Emmy-winning co-creator of Master of None. Not to be confused with that other Netflix offering Tiger King, this one could not be further apart or offer such a blessedly different family dynamic. If you happen onto a guy named Joe Exotic, you have turned on the wrong “tiger” movie.

This project came about because Yang wanted to tell a story similar to one lived by his own Taiwanese father and, though not his dad’s life, it’s close in spirit. Yang splits his film between the 1950s and ’60s past in Taiwan and the plight of a factory worker named Pin Jui (Hong Chi Lee), and present day New York City and the older version of Pin Jui (Tzi Ma). The younger man loses his one true love when he instead heads for the American dream, and winds up in NYC with an arranged marriage that never delivered happiness in any significant way but did produce a daughter, Angela (Christine Lo), who is now married herself and not always seeing eye to eye with Dad. But what if the opportunity, all these decades later, arises to again meet his true love?

That is where this scenario leads and it is all poignantly played out as the film drifts from past to present, from Mandarin and Taiwanese to English, from what could have been to what is. The things of life, in other words, and a universal family story that resonates beyond its own borders and should be recognizable to many lucky enough to experience this engaging film. Tzi Ma, just off playing a similar type of father in the wonderful Indie Spirit winner The Farewell, is an acting treasure and delivers a perfectly nuanced portrayal of a man living with regrets. Ko is excellent  too, as is a fine supporting cast including veteran Chinese star Joan Chen, James Saito and Fiona Fu.

When Yang first pitched this idea, Crazy Rich Asians, The Farewell and Parasite were not in the Hollywood lexicon, but now movies focusing on Asian life and lives are happily very much in vogue, and the timing couldn’t be better for Yang and his lovely film. This would have been a good one to also receive a theatrical platform and more attention, but see it without question.

Check out my video review of both Love, Wedding, Repeat and Tigertail above. Both films begin streaming on Netflix today. If you plan to watch either one, let us know what you think.