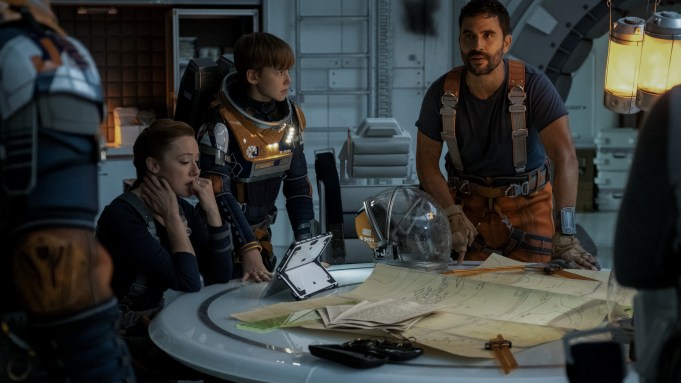 “I’m making a record of this,” young Will Robinson says to the camera, “because it seems we’re the first humans to try and turn a spaceship into a sailboat.”

So begins the first full trailer for Season 2 of Netflix’s Lost in Space, in which the Robinson family of the 24th Colonist Group encounters peril ranging from a raging waterfall to slithering monsters.

In Season 2, the Robinsons (Toby Stephens, Molly Parker, Maxwell Jenkins, Mina Sundwall, Taylor Russell) and Jupiter 2 are stranded on a mysterious ocean planet without their beloved Robot (Brian Steele). They must work alongside the mischievous and manipulative Dr. Smith (Parker Posey) and the always-charming Don West (Ignacio Serricchio) to make it back to the Resolute and reunite with the other colonists. But they quickly find all is not as it seems as they look for the key to finding the Robot and safe passage to Alpha Centauri.

The Legendary Television drama is written and was developed by Matt Sazama and Burk Sharpless, who executive produce alongside writer-showrunner Zack Estrin, Kevin Burns and Jon Jashni.

Filmed in Canada and Iceland, Lost in Space‘s 10-episode sophomore voyage begins December 24 on Netflix. Check out the trailer above — while digging Iggy Pop’s “The Passenger” — and the key art below, and tell us what you think.