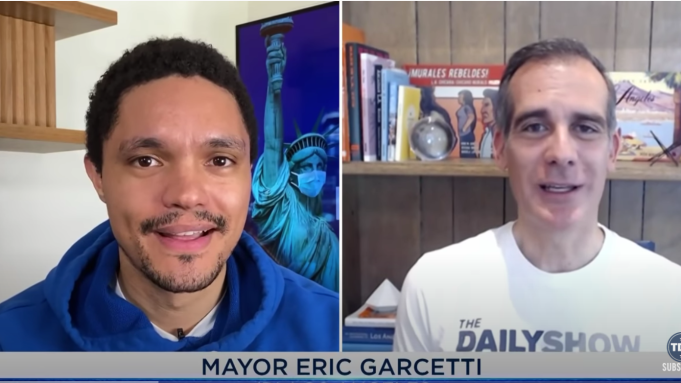 Relentlessly in ever-expanding damage-control mode after the explosive remarks Tuesday by a top health official that Los Angeles could be under lockdown until August, Mayor Eric Garcetti went for the fake-news crowd tonight, seriously.

“You can kill people and you can save people,” L.A.’s top civic leader told The Daily Social Distancing Show with Trevor Noah on Wednesday about what the stakes are for social restrictions in America’s second-largest city.

“Don’t be funny, don’t be a smart-aleck, don’t go together with 20 people at a dinner party and think that you can get away with it secretly,” Garcetti declared, having just told citizens a few hours earlier that he didn’t want to “turn Los Angeles into some sort of police state.” His Honor added: “We might not catch you, but someone’s going to catch coronavirus and you are going to wonder why two weeks later if that one night was worth it.”

Wearing a host-pleasing T-shirt instead of his usual skinny suit and tie, the extremely camera-friendly politician took his media tour to Daily Show as Angelenos were told masks now are mandatory outside their homes.

We’re requiring all Angelenos to wear face coverings when they leave the house. There are exceptions in place for small children or those with disabilities. pic.twitter.com/j7ecKiYQ4e

As you can see in the video above, Noah wanted to know what the real deal was with the “chaos” that came out of L.A. County Public Health Director Dr. Barbara Ferrer’s comments Tuesday that “with all certainly,” the stay-at home order set to expire at the end of this week would be expanded all the way to August.

As he has admitted to varying degrees of success on CNN shows and on GMA over the past 24 hours, the City of Angels mayor replied “everybody flipped out, thinking nothing’s going to change in those three months we’re still in locked down.”

Still, as L.A. residents learned via text, tweets and press releases Wednesdasy evening that Garcetti issued an order requiring they “wear face coverings outside their homes,” His Honor bobbed and weaved around Noah’s queries about when the newly expanded “safer at home” rules finally would disappear.

If he wasn’t so obviously trying to put out the fire that Ferrer intentionally or inadvertently set, the ambitious Garcetti would look like he is running for an even higher office. As it is, the longtime Joe Biden supporter is one of the key advisers to the ex-VP on who should be his running mate against Donald Trump and Mike Pence.

Still, with more and more retailers now able to open for curbside business in L.A. proper and the county itself and beaches somewhat accessible again, Garcetti does find himself “living in the gray,” as he says COVID-19 has placed the nation’s great cities. “I think that will stay for the next year or many, many months,” he told Noah of the safer-at-home order in one form or another. “That said, we’re going to take steps as often as we safely can.”

No word on what the penalty will be for Angelenos who do not wear a mask when outside in the coming days. However, I hear that law enforcement is expected to be out a little bit more in force over the next few days after a number of businesses blatantly disregarded the need for masks and social distancing last week when things first stated to ease up a bit from the limitations put in place in late March.

At the same time, however incremental, confirmed cases of the coronavirus and deaths still are rising in the economically ravaged and reopening region. The latest data had L.A. County with more than 34,280 cases and 1,660 fatalities as of Tuesday night from the respiratory disease that has spread all over the globe in recent months.