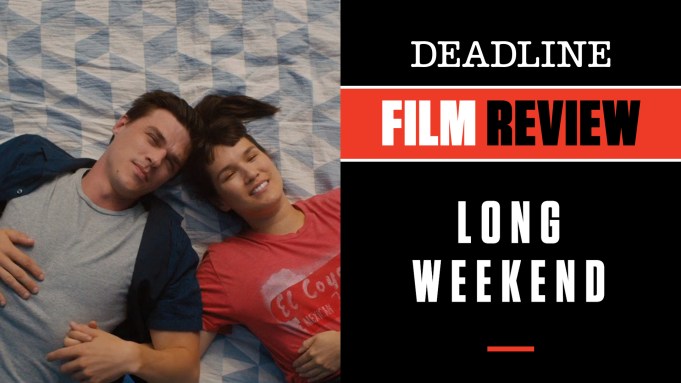 Rom-coms depend heavily on the on-screen chemistry between their leads, and when you throw in a time-machine scenario, those actors really have to be on their game to give it half a chance at credibility.

Fortunately for the modest but completely engaging new film Long Weekend, writer-director Steve Basilone got Finn Wittrock and Zoe Chao to sign on, and they do not disappoint in making this sci-fi spin on a well-worn and often-tired genre sparkle for most of its 91 minutes.

Wittrock is Bart, a down-on-his-luck wannabe writer stuck in a job scribbling blurbs for catalogs and meeting none of his potential. Throw is other facts of his life including the recent death of his mother, the breakup with his girlfriend and the loss of his apartment that has forced him to move into the garage of good friends Doug (Damon Wayans Jr.) and Rachel (Casey Wilson), and you get a pretty bleak existence. This sad sack of a guy even goes to old movies alone — in this case Being There, the ethereal 1979 comedy starring Peter Sellers, a bona fide cult classic in my opinion that we learn holds great personal meaning for Bart. In pure rom-com fashion, he meets cute with another filmgoer also there alone, Vienna (Zoe Chao), and the pair strike up an instant relationship, taking off into the night together because seemingly neither has anyone else to go home to.

Slowly, though, the mystery of Vienna deepens a bit as Bart discovers this is a girl staying in a local motel, carrying around a backpack of cash and possessing no cell phone or any discernible identification. (SPOILER ALERT) All that eventually gets answered when she finally reveals she is a time traveler from 2052. Oh, of course! That revelation understandably sends Bart over the edge, but Vienna, through sheer charm and believability, reels him back in and the relationship takes on new layers of meaning, more questions and the idea of how time can define us all in some ways. She has a reason for traveling to current times, so it makes sense on that level.

So, does this plot point also send us over the edge? Basilone handles it so deftly, including how it defies credibility to be logically true — even to the point of making Vienna’s and Bart’s own mental states part of the discussion — that we stay with it, and with them, all the way to an ending I found completely satisfying and just right.

At its heart, Long Weekend is a real charmer, a small gem in the online larder of weekly film releases these days. Wittrock and Chao made it work for me, both enormously appealing performers who carry the day in a slight but lovely romance. Wayans is effective in a supporting cast that also includes brief but amusing turns from Wendi McLendon-Covey and Jim Rash. Basilone is making his feature directorial debut here after a career so far as writer and producer on a number of sitcoms including The Goldbergs, Community and The Michael J. Fox Show. The transition to indie filmmaking is impressively accomplished, and he has left the familiar tropes of sitcom work behind.

Also, Being There is a personal favorite of mine, so let’s give points to Basilone for making it the reason these two disparate souls manage to get together in the first place. The choice of that movie adds a whole other layer of meaning here, but no spoilers as to why. You’ll either go with it, or you won’t. Long Weekend had me at hello.

Producers are Deanna Barillari, Sam Bisbee, Theodora Dunlap, Jess Jacobs, Laura Lewis and Audrey Rosenberg. Sony releases the Stage 6 Films production Friday. Check out my video review with scenes from the film at the link above.

Do you plan to see Long Weekend? Let us know what you think.