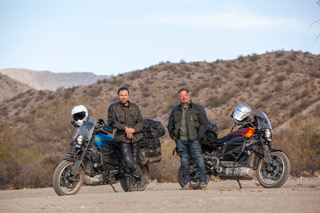 Ewan McGregor and Charley Boorman rev their motorcycle engines for one intense ride in their new Apple TV+ series Long Way Up.

In the trailer, which Apple TV+ dropped Tuesday, the Star Wars star and his TV presenter buddy take on a 13,000 road trip from Argentina to Los Angeles, stopping to smell the roses when they can. While driving nearly 150 miles a day on motorcycles may seem like a sizable challenge, it gets even tougher with the two actors opt to take electric Harleys.

“You’ll be the first people to go this distance, charging as you,” someone tells the adventurous duo.

The trailer features McGregor and Boorman on their various pitstops and lodging places, maxing out the power at some and meeting the locals at others. On the duo’s trip, they forge their own roads and experience all sorts of climate conditions from the moist heat of South America’s jungles to the frosty Patagonia winter.

Long Way Up, directed by David Alexanian and Russ Malkin, may see the stars experience some of the highs of their treacherous 100-day trip, but the series will also give viewers a deep look at some of the low points as well. The trailer teases McGregor and Boorman struggling to charge their electric bikes, relying on the kindness of strangers to continue their journey and dealing with unpredictability of the road.

The months-long trip will even take McGregor out of his Hollywood bubble, encountering locals clueless to his body of work.

“Did anybody see Star Wars?,” McGregor asks a quiet group of South American children. “Don’t think so. None of these kids have seen anything I’ve done.”

Long Way Up, which will be the duo’s third installation of their Long Way travel program,  is set to premiere globally on Apple TV+ on Sept. 18, with new episodes rolling out every Friday. The show was created and executive produced by Ewan McGregor, Charley Boorman, David Alexanian and Russ Malkin.