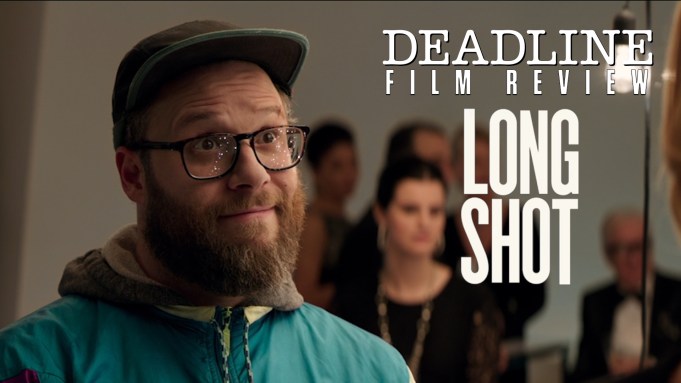 In the wake of the cinematic tsunami known as Avengers: Endgame comes a smart bit of counterprogramming for its second weekend: a romantic comedy targeted at adults. How about that for a nice change? This one, however, is predicated on an improbable coupling between Charlize Theron and Seth Rogen, but in its own way it works in the sense that opposites really do attract. The film was well received at last month’s South by Southwest Film Festival, and for good reason. The screenplay from Dan Sterling and Liz Hannah is a little far-fetched, to say the least, but in a world that welcomes strange bedfellows, why not? You either go with this, or you don’t. I did.

Now Rogen plays Fred Flarsky (where did he get that name?), a highly opinionated if not hugely famous political journalist for whom, a couple of decades earlier, Charlotte Field (Theron) was his teenage babysitter when he was just 13. There was a bit of an embarrassing incident one night, but cut to many years later when by chance he runs into her again at an event he is covering. The catch? She is Secretary of State, a world-class diplomat who would seem completely out of reach for a slob dresser like Flarsky. However one thing leads to another after their awkward reunion (including a couple of slapstick moments this film finds hard to resist) and against the advice of just about everyone, she hires him as her new speechwriter. Romance eventually ensues, much to the horror of her No. 2, Maggie (June Diane Raphael). Complicating matters is the fact that Charlotte has been given inside info from President Chambers (an amusing Bob Odenkirk) informing her that he does not plan to run for a second term (it seems he wants a movie career instead), setting her up for a presidential run herself. The presence of Flarsky in her life leads to lots of expected complications, but the sparks fly between Charlotte and Fred, as they thankfully also do between Theron and Rogen.

Theron should do more romantic comedies. She is pitch perfect and brings a certain credibility to the role, completely believable even in these circumstances. Rogen is more grounded than usual, but there are a few moments where he just can’t seem to shake the impulses we have seen from him in the majority of gross-out comedies he’s done in the past. I could have done without a couple of those scenes as they throw the tone a bit out of whack for what is really more a modern Roman Holiday, in which two people from opposite corners make a genuine connection even if it is fated never to work. Overall the pairing of Theron and Rogen is welcome indeed, and so is this film directed by Jonathan Levine, who keeps it all in check.

While it was being shot the movie was called Flarsky, but Long Shot is far more inspired in giving us a clue what to expect. Ultimately the setup and execution adhere strongly to classic rom-com formulas, and in this case it all works, for the most part. The supporting cast including Odenkirk and Raphael, both expert actors, is ideally chosen, with O’Shea Jackson Jr. nicely taking on the best friend role and Alexander Skarsgard scoring as the handsome but vapid Canadian Prime Minister trying to lure Charlotte into bed. Andy Serkis even turns up in an unsympathetic turn as a one-note political adversary. Rogen and Theron are producers, along with Evan Goldberg, A.J. Dix, Beth Kono, and James Weaver. Lionsgate releases it Friday. Check out my video review above with clips from the film included.

Do you plan to see Long Shot? Let us know what you think.