How The Pieces Fit In CAA's Acquisition Of ICM Partners
Read the full story
February 2, 2020 10:57am
4Comments 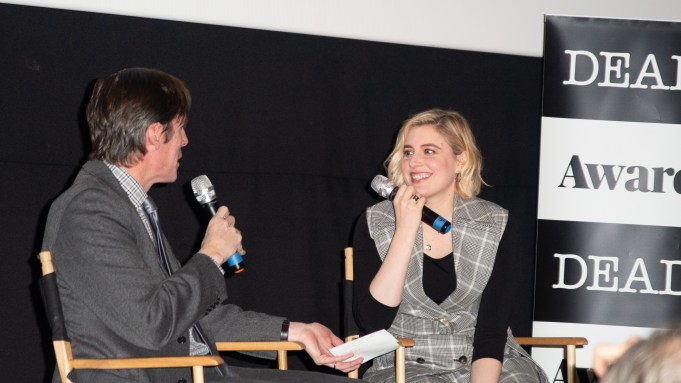 The time-shifting, “cubist” approach Greta Gerwig took in adapting Louisa May Alcott’s 1868 novel Little Women, the writer-director said, came to her early in the process.

“I always knew I wanted to start when they were adults and have it be a conversation between who they were as girls and who they are as women,” Gerwig said Saturday after an Awardsline screening of the Sony release at New York’s Landmark at 57 West. Fusing the two parts of the novel, set years apart, enabled Gerwig to set the March girls’ “snow-globe, halcyon days” of childhood against the “central ache” Alcott articulated as adulthood sets in.

The cross-cutting, which is accentuated by subtle contrasts in the cinematography of the sequences set at the beginning and end of the 1860s, also was signaled in the script with different colors.

Another signature element of the film — overlapping dialogue and boisterous movement of the characters around often intimate settings — was highly choreographed and not sweetened in post, Gerwig said.

“The way the dialogue was written was, there was a lot of overlapping dialogue, but it was pretty precise,” she said. “I wanted it to be a controlled cacophony. I didn’t want it to be messy. So, there were indications [in the script] of exactly which word the next person came in on.”

Over two weeks of rehearsal, Gerwig discovered “a very lucky alchemy” among the cast members, with Saiorse Ronan, Emma Watson, Laura Dern, Eliza Scanlen and Florence Pugh becoming “fast friends.” The task of hitting the marks of physical movement and overlapping dialogue “made it a team sport. … There are some scenes where there are eight people talking at once and the camera’s trying to pick up different little vignettes at one time.” Because of the cast’s chemistry, Gerwig said she felt that “all I had to do was point the camera at it because it was flying off the screen.”

Little Women, released in the U.S. at Christmastime, is closing in on $100 million at the domestic box office and its overseas tally is at $50 million and climbing. It is nominated for six Academy Awards, including Best Picture. Having invested years in the project, Gerwig recalled taking part in the ritual of visiting a theater on opening weekend. “It was such a meta-meta-meta experience. Jo [March] was watching her book get made and I was watching the film of this book that made me want to be a writer and I could feel Louisa May Alcott watching it all too. It was pretty incredible.”