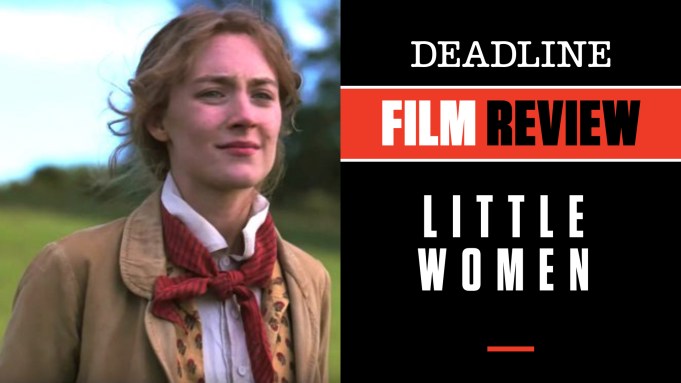 With at least six film versions preceding it, along with countless other television productions, is there really a need for yet another stab at Little Women, Louisa May Alcott’s classic tale of four sisters coming of age just after the Civil War? In the hands of writer-director Greta Gerwig, who clearly has a passion for the book and especially its timeless appeal to young women, the answer is affirmative.

By taking the key character of Jo March (Saoirse Ronan) and essentially putting the voice of the author into her and her battle for independence in a male-dominated society, Gerwig has put the emphasis on becoming your own person and making your own mark on the world. Is this a feminist take? Sure, but it is not blatantly in our face; instead it’s a warm and inviting look at these four different young women who each meet their fate head-on in their own way. Interestingly, there is a subtext about the role of money and financial inequality between men and women that I think no previous version has ever emphasized, and it adds a new layer to it all, at least in the way Gerwig weaves it all in.

I confess I have never read the book, and might have thought it just for girls, but I have to say the way Gerwig has brought it to life this time around intrigues me enough to check it out and try to see what she saw in it so clearly as something new for today’s digital-age audiences.

The movies have been in love with Little Women throughout the whole of cinema history, starting with silent versions in 1917 and 1918, then the only version to be Oscar nominated for Best Picture in 1933, another take in 1949, the Winona Ryder-starring 1994 version — the first to be directed by a woman (Gillian Armstrong) — even an indie try by Lea Thompson last year. Now there’s Gerwig’s lush new adaptation, her follow-up to Lady Bird, which made her one of only five women to be nominated for Best Director in Oscar history. Sony Pictures is releasing Little Women on Christmas Day, 25 years to the day after the Ryder film, and considering the Christmas themes and decor running through parts of it, I can’t think of a more appropriate holiday gift.

The casting here is immaculate, beginning with Ronan, who plays Jo with a lot of spark and determination to make it as a writer against all societal odds. Some of the best scenes in the film are those she shares with Tracy Letts as Mr. Dashwood, the publisher she deals with in order to sell her manuscript. Priceless stuff. Florence Pugh, who still haunts me from her role in Midsommar, brings a whole new level to Amy, the March sister who is most realistic in her pursuit of a husband who can take care of her. She is the least sympathetic of the sisters but one, as played by Pugh, who is three-dimensional if a bit oft-putting. She lands Laurie, the young man played nicely here by Timothée Chalamet, who seems to be caught in the middle between Amy and Jo — pining for the latter, who isn’t on the same page so to speak. Audiences might wonder why Jo is part of the Laurie resistance, just as he does, but it adds some delicious conflict to the proceedings and says something about the choices we make in life.

Emma Watson as Meg is the more settled March sister, and Eliza Scanlen plays Beth, the one whose lot in life sadly touches us the most. Among the rest of the cast standouts include Laura Dern, warm and wise as Marmie, and the indomitable Meryl Streep, who nails Aunt March as only she can, with biting lines and not-always-welcome advice. Joining Chalamet among the men, whose story this decidedly is not, is French star Louis Garrel as Friedrich Bhaer, a very different gentlemen caller, and Bob Odenkirk in briefly as Mr. March, finally showing up after coming home from the war.

Gerwig’s screenplay is at all times faithful, even more than that in some ways, to Alcott and what she was saying with this seminal novel, but it really adds layers I haven’t ever seen in any Little Women. On top of that, this film confirms her as a director to be reckoned with. The production values she brings are simply wonderful, including Alexandre Desplat’s melodic score, Yorick Le Saux’s gorgeous lensing, Jess Gonchor’s picture-perfect production design and the period costumes of Jacqueline Durran. Producers are Amy Pascal, Robin Swicord and Denise Di Novi. Check out my video review with scenes from the film by clicking on the link above.

Do you plan to see Little Women? Let us know what you think.

Greta Gerwig On Why There Is A Need For A New ‘Little Women’ And How It Is More Pertinent Than Ever – The Contenders L.A. Video