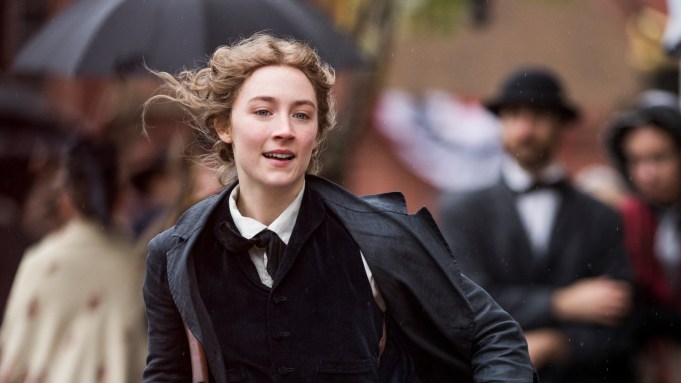 Greta Gerwig, before adapting and directing Little Women, came to know the source material intimately, having read and re-read Louisa May Alcott’s 19th century novel since childhood. But bringing a new version to life required picking up on themes in the book that could propel a contemporary re-telling.

“The last time I had read it was at 14,” she recalled in a Q&A after an Awardsline screening of Sony’s awards contender (watch video highlights above). “Then, I read it when I was 30, and I felt like I had never read it before. I couldn’t believe how modern and pressing and urgent the message of the book was. There seemed to be all these themes running underneath it that were right there about women and authorship and ownership and art and ambition and money. I just thought, ‘Oh — this is all the stuff that I’m interested in.’ And it was right here in this book that I loved so much, but I never really noticed it.”

The script employs a structure that helps the film strike a balance between pure plot mechanics and the more purely emotional or reflective moments among the sisters in the March family. The film cuts between the sisters in early adulthood and a period seven years earlier, when they spent hardscrabble years together bonding with each other and their mother while their father was fighting in the Civil War.

“You’re always walking with your younger self. You’re always answering to that younger person about who you are and where you’re going,” Gerwig reasoned. With a literary classic that has been adapted multiple times for the screen, she acknowledged there is a “collective memory of Little Women, a sense of it. I felt that my way in was to be able to deliver on those moments of gathering around the fireplace and reading the letter from father and everybody’s all together. … I could do that because it’s gone.”

Gerwig won the writing and directing gig before her breakout debut Lady Bird had been released in 2018, so once that production wrapped she knew she wanted to go back to the same casting well. “I knew it was Saiorse [Ronan] and I knew it was Timothée [Chalamet] because I knew I wanted to see them again,” she said of two of her lead actors. Tracy Letts also returns to the Gerwig fold, playing Jo March’s curmudgeonly publisher.

Other cast members came from Gerwig’s own film tastes. Louis Garrel, who plays the professer Friedrich Bhaer, has appeared in films by Bernardo Bertolucci and Christophe Honoré, and his father is filmmaker Philippe Garrel. He also has a striking European magnetism that causes a stir in staid New England.

“In the book he’s described as a German professor without a single attractive feature. I thought, ‘It’s the movies – we’re not doing that,” Gerwig laughed. “Nobody loves Jo March because she married a German professor.'”

In a similar spirit, Gerwig entrusted the look of her long-cherished story to cinematographer Yorick Le Saux, whose credits include Luca Guadagnino’s I Am Love and Olivier Assays’s Carlos. “I didn’t want the camera to be nailed to the floor,” she said. “I wanted it to have a sense of movement and a restlessness to it.”

Other key aesthetic elements, Gerwig said, included shooting on film and in the very Concord, MA area where Alcott lived and set her story. “Everything there is just stunningly beautiful and preserved,” she said. “Pretty much anywhere you point the camera it looks like a Winslow Homer painting.”