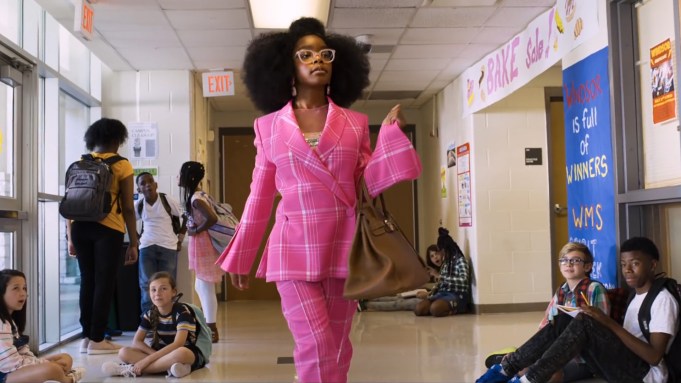 For the second time in just two weeks, after the current hit Shazam!, I am reviewing a movie clearly inspired by the 1988 Tom Hanks comedy, Big, the Gone with the Wind of body-swapping movies that apparently continues to have an impact on filmmakers young and old. When I say young, I really mean it in this case as, believe it or not, Universal bought the concept of the new film, Little, after a pitch from then-10-year-old Black-ish co-star Marsai Martin.

Her idea essentially was a gender switch on the Big concept in which a demanding and self-possessed career woman who one day through the magic spell of another little girl, suddenly finds herself reverted to her 10-year-old self — but still barking orders and as obnoxious a personality as she was before. In other words, she is a 35-year-old (or so) trapped in a 10-year-old’s body. I am happy to say that, although more one-dimensional and a bit of a one-joke premise than was Big, some sharp writing from Tracy Oliver and director/co-writer Tina Gordon (from that “pitch” and a fleshed-out story by Oliver) and a great trio of female leads make this work as well as it does. The execution overcomes a very predictable seen-it-before setup.

Martin takes on the key role of Little Jordan Sanders, who dominates the proceedings after that spell is cast and suddenly finds herself trapped in her past, but very much with the mind and mouth of a woman who is domineering in personal and professional life. She takes no prisoners and is completely absorbed in herself. We see that played out early on in the form of the grown-up Jordan Sanders played intensely by Regina Hall. Sanders drives her employees crazy. They are living in fear most of the time, and that particularly includes key assistant April Williams (Issa Rae). But when she becomes “little” again, the tables are switched as Williams must come off as a mother figure to her in order to avoid getting into big trouble from the Child Protection Bureau’s agent (Rachel Dratch) who threatens her with jail time if “little” Jordan isn’t back in school post haste. As long as Jordan is little, they are forced to play by the rules, even as Jordan tries to break every one of them. As Martin’s Jordan goes from spoiled adult to spoiled brat, the gags intensify and, though repetitive after a while, they still land some zingers. Best scene revolves around her return to school when she tries to seduce the good-looking teacher, Mr. Marshall (Justin Hartley). His reactions to this young girl’s flirtations are worth the price of a ticket.

The cast is lots of fun, but it is Rae who takes top honors and keeps things toned down and on a credible level despite the incredible situation. Martin is a wonder, not only nailing the acting with abandon but also taking an executive producer credit, the youngest to ever get one on a major studio picture. She is indeed a force of nature and knows exactly how to play this. Hall does fine, but her part is mostly one-note as she appears in the first and last parts of the film. SNL‘s Mikey Day has fun as a pretentious client who drives Sanders crazy and seemingly can’t be pleased. Dratch is a riot in her single scene. Luke James is amusing as the older Sanders’ boy toy who suddenly has to change up his sex drive when our little one is the new center of attention. This all comes from the Will Packer comedy factory that has delivered recent hits to Universal including Girls Trip and Night School. Kenya Barris and James Lopez share producer credits. Universal releases it Friday. Check out my video review above with scenes from the film in it.

Do you plan to see Little? Let us know what you think.