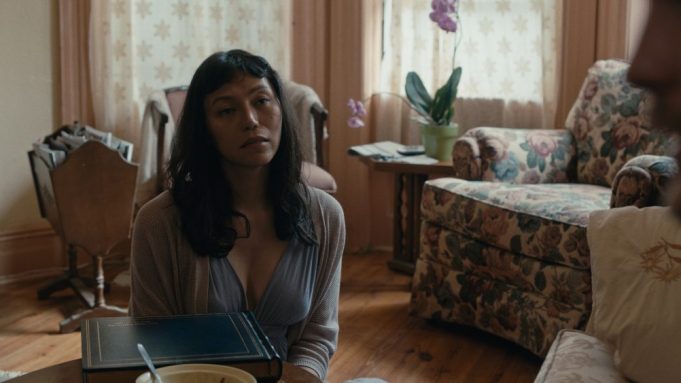 From romance to tragedy, the first trailer for Isabel Sandoval’s Lingua Franca offers a riveting glimpse of the story of Olivia, an undocumented Filipina trans woman. Ava DuVernay’s ARRAY Releasing is set to virtually debut Lingua Franca in select theaters and on Netflix August 26.

Lingua Franca made history at the 2019 Venice International Film Festival Venice Days program as the first film directed and starring an openly trans woman of color to screen in competition. The film follows the story of an  Olivia (Sandoval) who is the live-in caregiver for Olga (the late Lynn Cohen), an elderly Russian woman in Brooklyn’s Brighton Beach neighborhood. Olivia’s main priority is to secure a green card to stay in America, but when she unexpectedly becomes romantically involved with Olga’s adult grandson Alex (Eamon Farren), issues around identity, civil rights and immigration threatens Olivia’s very existence.

The film marks Sandoval’s third feature film and the trailer is as provocative as the film itself, immediately giving us a taste of the obstacles between Olivia and Alex and balancing that with their romance.

Lingua Franca is set to have special screenings along with a virtual Q&A with Sandoval on August 19 at 7pm PST at Los Angeles’ Laemmle Virtual Theater as well as Atlanta’s Out On Film at 4:30pm PST. The same day she will be joined by Co-Producer Carlo Velayo and actress Ivory Aquino for a Q&A at New York’s NewFest at 5pm PST.