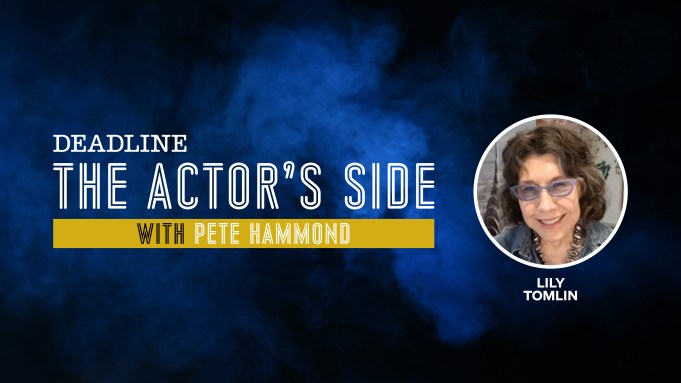 If you are a Lily Tomlin fan (and who isn’t), do not miss this week’s episode of my Deadline video series The Actor’s Side as I go one-on-one with the great Tomlin. We cover her entire career, starting out with the first moment she contracted a touch of show business to what is happening with the final season of her comedy series Grace and Frankie.

Tomlin explains that she, co-star Jane Fonda and cast and crew were halfway through shooting the fifth episode of what has been announced as the seventh and final season of the longest-running show in Netflix history. She isn’t sure when they can go back to work, but hopes it is soon. So do we all, as I point out the series has really filled a void — particularly for older viewers to whom it gives such hope. Tomlin points out she has heard that too, which is “great for two semi-sexy old broads carrying on like teenagers.” She says when it does finally end it will be bittersweet. She also says the team has been active these past months doing table reads via Zoom for each of the upcoming episodes.

Tomlin says he has always been a big fan of Fonda’s, and tells me exactly how their seminal 1980 smash hit comedy 9 to 5 came about — and also recounts an absolutely hilarious story about the movie’s New York premiere and what happened with one of the guests (her good friend Lillian Gish), and it is all told in classic Tomlin style.

We also talk about her film debut in 1975’s Nashville and feels that director Robert Altman is the only one who ever would have thought of putting her in a movie at that point. It was a good move and earned Tony, Grammy, and multiple Emmy winner Tomlin an Oscar nomination for Best Supporting Actress as well as several critics awards. She has successfully worked in all mediums for decades, especially since becoming a household name in Rowan and Martin’s Laugh In in the 1960s.

There is still so much to look forward to, including how Grace and Frankie — for which she has been nominated four times for Emmys — wraps up (she says creator Marta Kaufmann won’t tell her even if she knows), and exactly what is happening with that long-rumored sequel to 9 To 5 for Jane, Dolly and Lily. Hint: if you have a good idea for it, now is the time to start writing.

To watch our conversation and get Tomlin’s view of the Actor’s Side, click on the video above.