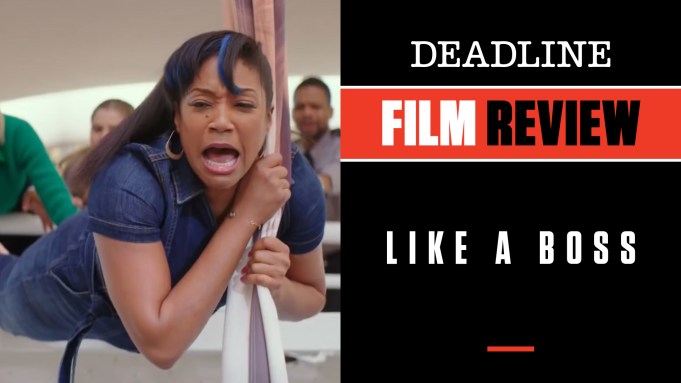 At just 83 minutes including end credits, the new female buddy comedy Like a Boss feels twice as long. It is painful to watch such appealing stars as Tiffany Haddish and Rose Byrne stuck in this witless enterprise that promises to be about female friendship and empowerment but fails miserably as it falls into a morass of cliches. If ever there was an argument supporting the need for female filmmakers, it is this hapless movie that not only was directed by a man but also written by two men. Judging by the results, it appears they are clueless as to how women act in the real world.

Haddish has an executive producer credit and should have known better. Snce her terrific breakout in Girls Trip she has fallen prey to a lot of mediocre choices, and you can add Like a Boss to the list. It is a real shame too since the teaming of Haddish and Byrne had real possibilities.

Miguel Arteta directed, and considering the excellent work he did with Beatriz At Dinner he seems unable to navigate the broad comedy and tonal deafness the script from Sam Pitman and Adam Cole-Kelly provides. There is a woman credited with the story, Danielle Sanchez-Witzel, but we can only hope the product on screen isn’t what she had in mind when she came up with the idea.

Plotwise we quickly learn Mia (Haddish) and Mel (Byrne) are lifelong best friends who went into business together running a cosmetics boutique that sells packages of female beauty products labeled “One Night Stand.” Although they are BFFs, they have wildly different views of the world they are traversing together. Their financially foundering business, meanwhile, gets the eye of a guy named Josh (Karan Soni), the “yes man” for cosmetics entrepreneur Claire Luna (Salma Hayek), who aims to take over Mia and Mel’s operation by buying a 51% stake. Mia frowns on it but eventually gets talked into Claire’s offer of a 49% stake, with the caveat that should Mia and Mel break up their partnership she gets control.

Immediately Claire starts scheming to make them hate each other, but in my case only succeeded in making me hate her and this movie. There is an occasional laugh here and there in the proceedings, and you can really see Haddish in particular trying hard to make this thing come alive, which it rarely does even as she resorts to all sorts of slapstick attempts. Byrne grounds her with a nice goofiness and likable quality, but it isn’t enough, while Hayek, who carries around a gold club and seems to delight in breaking things to make her point, is strictly one dimensional and lacks total credibility as a successful businesswoman.

The raunchy humor and non-starter jokes play and sound like they were written by men, and that is part of the problem. Claire even has pitted a rival male team again Mel and Mia, who are trying to sell their product which has the unsubtle and sexist name of “Get Some.” Oy. Role models these people are not for the target audience of young women drawn to theaters this weekend to check it out. Sadly the first comedy of 2020 and the new decade is a bust. (That said, the couple of women sitting behind me in the theater where I saw it at a Thursday night preview was laughing through the whole thing.)

Apart from the leads, Emmy winner Billy Porter and dumb comedy stalwart Jennifer Coolidge are OK in one-note roles as associates of Mia and Mel. Coolidge’s shtick is getting a little tired though, methinks. And some scenes are going to make you wince, particularly a baby shower with a cake that needs to be seen to be believed. On second thought it is better left unseen, like the film itself.

Producers are Marc Evans, Peter Principato, Itay Reiss and Joel Zadak. Paramount releases it today. Check out my video review at the link above with scenes from the film.

Do you plan to see Like a Boss? Let us know what you think.