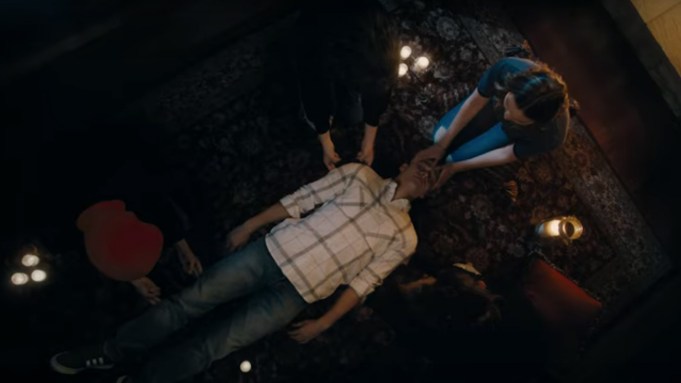 Hulu has released the Season 2 trailer for horror series Light as a Feather, from AwesomenessTV, Wattpad and Kelsey Grammer’s Grammnet (Girlfriends).

In Season 2, having inherited the curse brought on by the lethal game of Light as a Feather, McKenna (Liana Liberato) finds herself plagued by the mysterious chrysalis on her back — a ticking clock compelling her to play a new round of the game. But McKenna refuses, unwilling to put anyone else in harm’s way. However, as the curse begins to destroy her from the inside out, she’s forced to turn to the only person who can possibly help her — Violet (Haley Ramm).

Season 1 of Light as a Feather followed five teenage girls as they deal with the supernatural fallout stemming from an innocent game of “Light as a Feather, Stiff as a Board.” When the girls start dying off in the exact way that was predicted, the survivors must figure out why they’re being targeted — and whether the evil force hunting them down is one of their own.

Light as a Feather is created and executive produced by R. Lee Fleming Jr. and produced by AwesomenessTV, Wattpad, and Grammnet for Hulu.

All eight episodes of Season 2 premiere Friday, July 26, on Hulu.