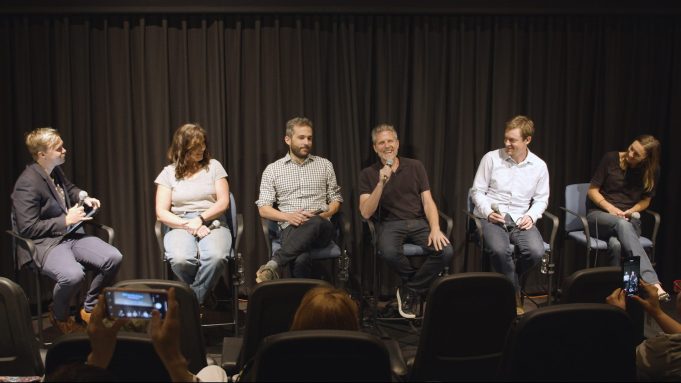 To understand the intensity of work on Life Below Zero, one need only hear cinematographer Michael Cheeseman’s story from four days ago. Traveling to Alaska’s Kavik River Camp with its owner, Sue Aikens—one of the National Geographic series’ documentary subjects—the DP experienced one of the most wild 24-hour periods imaginable.

“We were in a situation where, in a day of 24 hours, it was cold and misty in the morning, it started to rain, then it started to have a snowstorm—and then the sun came out and we’re like, ‘Oh my gosh, thank goodness,’” the cinematographer explained last night, at Awardsline’s FYC event for the series. “All of the sudden, the snow came back—not just a little snow, like full-blown snowstorm—so the temperatures are jumping from 65 degrees all the way down to 15 degrees.”

Demonstrating Alaska’s inherent environmental threats—from extreme temperatures to hungry predators—Life Below Zero is a passion project for all involved. And as Cheeseman explained in conversation with Awardsline, it’s not only the series’ documentary subjects that are faced with danger, in shooting Life Below Zero. On a daily basis, the crew is exposed to the exact same threats.

“When we’re shooting, you have to wear gloves; if not, you’re going to get frostbites, and it’s a terrible thing. Nobody wants frostbite, nobody wants to have damaged fingers,” the DP said. But for Cheeseman, shooting in subzero temperatures isn’t just tough on the body or the mind; it’s complicated on a logistical level, as well.  After all, nothing complicates the process of operating a camera like wearing gloves. “[As] cinematographers, we have to have dexterity to zoom the lens, focus a lens, touch the camera buttons, fly the drones. Anything like that, we have to use our fingers [for],” he explained. “It’s just our livelihood.”

While Cheeseman frequently films in -20 degree weather, with 20 miles-per-hour windchill, editor Jenny Nelson is faced with a whole other set of challenges on the series. With one to three editors working on each episode, and only five to seven weeks to turn each episode around, Nelson typically wades through “100 to 120 hours of footage,” before arriving at a 47-minute piece. “We have a lot of people in that process that help out. It’s not just the people up here,” Nelson said on the panel. “We have story producers that pull out and decide what stories we’re going to tell from what they shoot, and then they let us know, and we do our thing.”

For executive producer Travis Shakespeare, the biggest challenge with Life Below Zero has been achieving continuity, on visual and narrative levels, with small teams sent out to shoot hundred miles apart from one another.

“In order to create consistency, we had to basically create a system of what we call ‘indoctrination.’ It’s a cult, inside the team here,” the EP joked. “We created a visual style early on that we wanted to achieve, and an editorial vision, and basically every single time out, we take the teams and sit down with them, and review footage, and look at stylistic choices. We look at what’s working, and what’s not.”

The most famous of the series’ subjects, Aikens explained that the process of producing great episodes comes down to respect and trust. “There is a lot of back-and-forth, there is a lot of respect,” she said, “and that’s the key thing for me.”

To take a look at our conversation with the team behind Life Below Zero, including Aikens, Shakespeare, Cheeseman, Nelson and EP Joe Litzinger, click above.