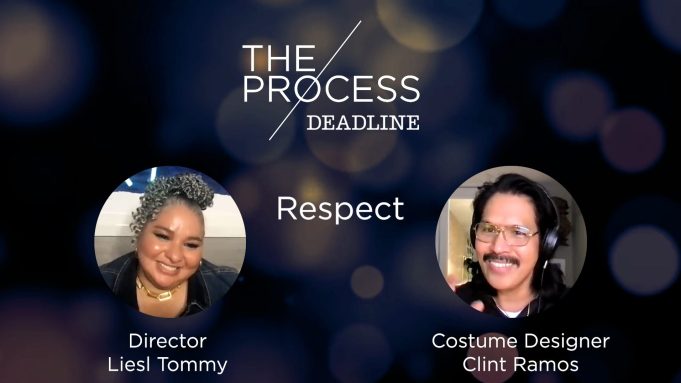 With her Aretha Franklin biopic Respect, director Liesl Tommy looked to capture a world of “Black excellence…beauty and…fabulousness” from the past that she feels few films ever have.

Her feature directorial debut follow Franklin (Jennifer Hudson) from her childhood in the 1950s through her rise to stardom, examining the late musical icon’s journey to find her voice, as well as personal challenges she faced in her life, including the loss of her mother at a young age and an abusive marriage to her manager Ted White (Marlon Wayans).

Tommy took her guideposts in crafting Respect‘s visuals from Franklin herself, recognizing early on that costume design would be integral in telling the story of someone who loved fashion as much as she does. She says in the latest edition of The Process that the designer she needed was someone who understood “tailoring” as well as “glamour,” and “was also going to understand how to believably live” in the different periods of time the film would depict.

This ended up being Clint Ramos—an artist she first met in New York City 19 years ago, when the pair were launching their careers as “baby theater makers,” who shared a shorthand with her and fully understood her aesthetic. While Tommy says that she’s collaborated with Ramos over the years on “too many plays…to count,” two of their most notable collaborations prior to Respect came in Off-Broadway and Broadway productions of Danai Gurira’s play, Eclipsed. (Ramos won a Tony for the latter, becoming the first person of color to win the award for Best Costume Design in a Play. Tommy, meanwhile, earned a nom for Outstanding Director, becoming the first African American woman to do so.)

As the costume designer for Respect, Ramos would fashion precise recreations of some of Franklin’s most famous looks, while tweaking others to service the story. 85% of the pieces worn by Hudson were built from scratch, with a variety of vintage pieces also brought into the mix.

Part of what struck the designer about Franklin as he dove into research was just how diverse her mode of dress was. “It changed very frequently, and almost overnight sometimes, and to me it really showed she was following her gut,” he says. “She wasn’t a slave to fashion; she wasn’t just being dictated by the trend.”

Another takeaway for Ramos in examining photographs of Franklin was that in every moment, her humanity came shining through. “Nothing is holding her in, so there would be a hair that’s a little askew, a little sweat on the nose. It’s almost Aretha saying, ‘No, you will not box me in into this fashion photograph that you want me to be in. I’m a human being,'” he observes. “So, that’s kind of how we planned everything. What is the piece of clothing that she’s wearing? What is that going to do to her, and how is that going to affect her performance?”

Part of Ramos’ challenge on Respect was bridging the gap between Franklin and the actress playing her—making sure that he was tailoring the clothing to work with Hudson’s “completely different body type,” and getting “an emotional calibration” of how she was going to wear them. “Jennifer moves differently, although she had an Aretha walk and an Aretha stance, so all of that factored into redesigning those performance gowns,” he says. “A lot of it was reinterpreted, and a lot of it, I really wanted to stay close, and then maybe just tweak the colors to work with Jennifer’s skin, and also what we were doing in a particular scene.”

When Tommy looks back now at her first feature, she finds many things to be proud of—including the fact that the film “is Black as f**k,” and was made with total “devotion and love” for Franklin.

For Tommy, it’s particularly meaningful that in the course of making the film, she was able to meet Franklin’s “proudly Black female gaze” with her own.

“For so long, movies like Respect would have been written and directed by white men. We’ve watched so many movies about ourselves that were created by white men, so white men were telling us about who we are, and to me, that’s devastating,” she shares. “Some of those films were great, but they’re not complete. I’m not saying that this film is complete, but I am saying that there are details in this film that could only have happened with a Black woman writer and director—and I know that that’s true because of the profound trust that those actors placed in me.”

In conversation on The Process, Tommy and Ramos touch on all aspects of their Respect collaboration, including how they navigated a Madison Square Garden scene involving around a thousand background performers. They also get into their first meeting “Off-Off-Off-Broadway,” their shared artistic mission from the early days, as immigrants and people of color who “felt like outsiders in the American theater,” Tommy’s lifelong dream of being a filmmaker and more.

Check out the full discussion above.