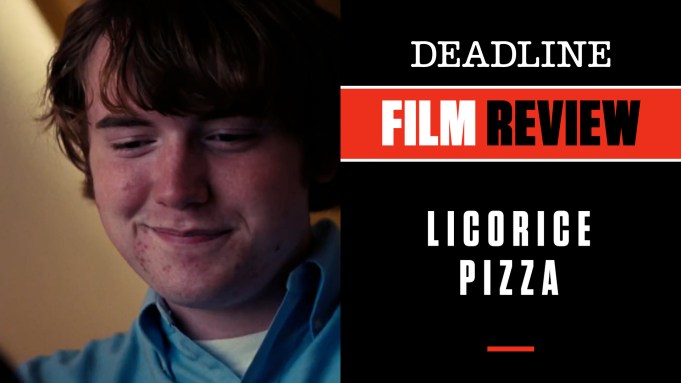 One of the few American auteurs who can do just about anything he chooses and get studios to climb on board, Paul Thomas Anderson again takes us in new directions with Licorice Pizza, perhaps his lightest, most engaging and — dare we say it? — accessible movie to date.

Make no mistake, this is a film with the unmistakable stamp of Anderson, an eight-time Oscar-nominated filmmaker of such acclaimed movies as Punch Drunk Love, Boogie Nights, Magnolia, There Will Be Blood, The Master, Inherent Vice and his most recent, 2017’s Phantom Thread. But with the often raucously funny Licorice Pizza, he has served up a slice of his own view of a cockeyed relationship between two young people — one with the boy quite a bit younger than the girl — and their series of episodic adventures navigating of the terrain of the San Fernando Valley, a favorite haunt of Anderson who grew up there himself.

Not only casting unknowns, but virtually untested, actors Alana Haim and Cooper Hoffman (son of the late Philip Seymour Hoffman) in the leads and setting it all in 1973 (the same year American Graffiti opened, a stated inspiration for Anderson), the director has rolled the dice on a story that is loosely based on the youthful experiences of producer Gary Goetzman. Now partner with Tom Hanks, he not only was a kid actor around this period but also quite the entrepreneur, starting waterbed, pinball machine and various other enterprises in addition to taking on smaller roles in movies like 1968’s Yours Mine and Ours, which starred Lucille Ball.

Anderson is a friend of Goetzman’s and was enthralled enough with his spirited tales of the time to somewhat base Hoffman’s character, Gary Valentine, on his exploits, all the while clearly exaggerating the facts in many instances. Sometimes he has changed the names of real-life people, sometimes not, but it is all wrapped around the infatuation a 16-year-old high school kid has with a twentysomething girl named Alana, the very name of the first-time film actor he has cast here and eliciting a sensational breakout star performance from her. When he meets Alana, she is a photographer’s assistant where he is getting his school picture taken. With the pangs of first love, he instantly tries to make a connection, and lo and behold she doesn’t shut him down. Although Anderson is careful to keep this relationship innocent enough, it becomes the trigger for a series of episodes involving acting auditions, political campaigns and wild and woolly waterbed deliveries.

Anderson isn’t necessarily interested in building a lot of plot here, just enough fodder for a memorable coming-of-age romp through the San Fernando Valley during a period where we had a whole bunch of singular films and filmmakers who regularly turned out original and unique movies like this one — now belonging to a much rarer breed of writer-directors allowed to march to their own drummer without worrying about how to follow it up with four sequels. Much of this is LOL hilarious, some of it poignant in its own way, some of it outlandish and nostalgic and all of it very PTA.

Anderson hangs it all on his two wonderfully engaging leads, but the supporting cast is given moments you won’t soon forget. Let’s start with Bradley Cooper, adorned in white polyester ’70s disco outfit as producer Jon Peters, then best known as an ex-hairdresser who became Barbra Streisand’s boyfriend. Anderson uses the name — and the real-life waterbed delivery Goetzman and friends made — to turn it into a wild fiasco at the expense of Peters (who appears here hyped up on some sort of substance). Cooper is a hoot. I hope Peters doesn’t sue.

Even though Christine Ebersole’s amusing caricature of Ball is obvious, since the large cast of kids did actually appear on The Ed Sullivan Show singing the theme song to Yours Mine and Ours (the cast in Licorice Pizza lip-synch to the actual tune), Lucy “Dolittle’s” backstage freakout at the show is an invention. And Sean Penn as revered actor Jack Holden clearly is meant to emulate William Holden with the name changed as he tries to pick up Alana during an audition and then outing to Tail O’ the Cock restaurant in the Valley, including an incident involving a wild motorcycle stunt there engineered by the restaurant’s owner Rex Blau (Tom Waits) that is also likely totally invented (but in case it wasn’t, then names have been changed).

And L.A. natives like me will recall Councilman Joel Wachs, whose name isn’t changed as Alana gets a job working for his mayoral campaign. Benny Safdie deftly plays Wachs. But if there is one certified scene-stealer it most definitely is Harriet Sansom Harris, who plays actual child agent Mary Grady in a sequence where Gary brings Alana to launch an acting career, and Grady gives her the facts of life of show business. It is hysterical. If you can win an Oscar for one scene, Harris gets my vote right now for Best Supporting Actress. A family dinner at Alana’s (with her real-life family playing the roles) also is one for the ages. Hell, the Munsters even show up in this movie.

Put it all together and it adds up to this lighthearted confection (the title comes from an actual record store chain, which had a location on Ventura Boulevard) that also goes gently into the affairs of young hearts with some unforgettable characters we thankfully get to spend a two hours and 15 minutes with. With a killer soundtrack, it’s a delicious mix of real and remembered, made up and made funny, wild and crazy moments in our past brought back by a one-of-a-kind auteur who seems to be having as good a time making this movie as we do watching it.

Producers are Anderson, Sara Murphy and Adam Somner. MGM and UAR releasing open it November 26 in select engagements (including an exclusive 70MM run at Westwood’s Village Theatre). Focus Features also is credited. Check out my video review with scenes from the movie at the link above.

Do you plan to see Licorice Pizza? Let us know what you think.