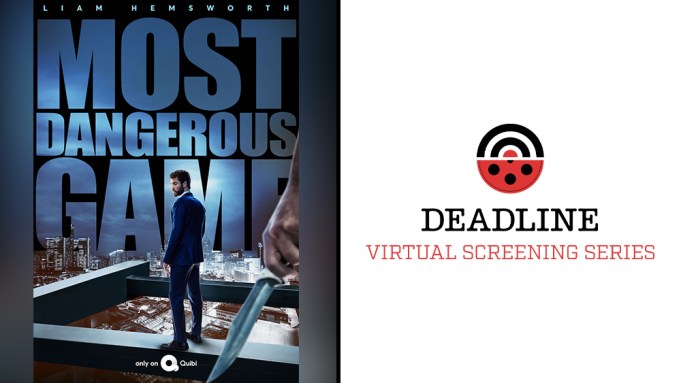 In shooting his latest project there can be no question that Liam Hemsworth got quite a workout. Even Jason Bourne would have been impressed.

” Thank you. I’m glad you noticed, but I did an enormous amount of preparation, thankfully, going into this, you know, running, starting with 5K and then sort of working up to 10K, which was a lot for me, and I think we all kind of underestimated how much I was actually going to be running in the first few weeks of the shoot, and we quickly sort of figured that out, and yeah, it was great to do something so physical, but running is not an easy thing on your body. It is hugely impactful, and there was definitely some sore spots all around, ”  said Hemsworth about working on the Quibi short form drama The Most Dangerous Game.

This was one of the first projects to see the light of day when Quibi launched in April and for me it was the introduction to the innovative new service that aims to provide entertainment in short doses on your phone.  I consumed all of this one in one night , all 15 episodes, all under 10 minutes each.  Watching it continuously (on my TV set,not my phone) it felt like a movie, albeit one with a LOT of cliffhangers. “That’s what I love, it’s like an extended feature film. It’s about 145 pages,  but the pace is a lot quicker, and like you said, every 10 minutes or so, you’re left with this cliffhanger. So, unlike a feature film, where you have an hour and a half to sort of draw things out and develop that story, you kind of need to develop that story each 10 minutes, and I think that’s what was really exciting to me and definitely something new,” he said as he zoomed in from Australia for our conversation with showrunner/writer Nick Santora also joining us.  At first though Hemsworth wasn’t exactly sure about signing on.

“I think there were a lot of questions that sort of came up in my mind, and I think at first was I was a little hesitant, you know, as to what this platform was going to be and how it was going to be perceived, but after talking to Nick and Jeffrey Katzenberg and a few of the other people that were showrunning,  I sort of looked at it in a way that the material was great and it didn’t seem like my job was going to change too much,  and it didn’t. I wasn’t aware of these sort of episodes or breaking it down too much. It just felt like shooting a film for me, and I think there’s so many different platforms coming through these days, and  this is just another way of viewing film and television, and I guess maybe directed at having a slightly shorter attention span,”  he said.

For Santora the new format, cooked up by Quibi partners Jeffrey Katzenberg and Meg Whitman, offered an unknown for him as a writer. I told him for me as a viewer it was addictive, kind of like chewing bubble gum. “Yeah. It’s very challenging in the writing of it, but  actually, since I did the first Quibi series, and since then, I’ve done a few others, it forces you to be a more disciplined writer, and it honestly made me a better writer. I’ve been doing this 20 years, and the past year I’ve become a better writer because of Quibi, and Most Dangerous Game, season 1. Look, I’ll be honest, I watch it now and I enjoy it.  You used bubble gum. I called season 1 of Most Dangerous Game  Pringles television. You just keep popping another one into your mouth,” he laughed.

The storyline is as old as books and movies get beginning with RIchard Connell’s short story in 1924 and showing up in various forms ever since. Basically this is an updated version of the plot where a man (Oscar winner Christoph Waltz) offers a runner a potential fortune of millions if he can outlast and survive a group of “hunters” over the course of a day who are doing this for sport. Each episode ends with the runner (Hemsworth as the appropiately named Dodge) in some sort of perilous situation.  It really is like those old time movie serials that played before the main feature, just a new age version.  Santora said it was originally developed years ago as a regular series for NBC , and has been reconfigured as the perfect fit for Quibi.  Hemsworth, also an Executive Producer approves of how it all turned out, even to the point that there could be more in store for the format.

“With all these new platforms and things, primarily, for the past 10 years,  myself and my team have been really focused on just film, and then progressively, the last couple years, because of the huge amount of great content in the TV world, we’ve started to look at things like that, and then this Quibi thing came up,” he said. ” I think at this point whatever platform it falls on it’s about finding good content and good stories and interesting characters and working with great people. You know I’m open to anything at this point, it’s just a different world we’re living in. there is so much more to choose from.”

Check our video from our conversation at the link above.