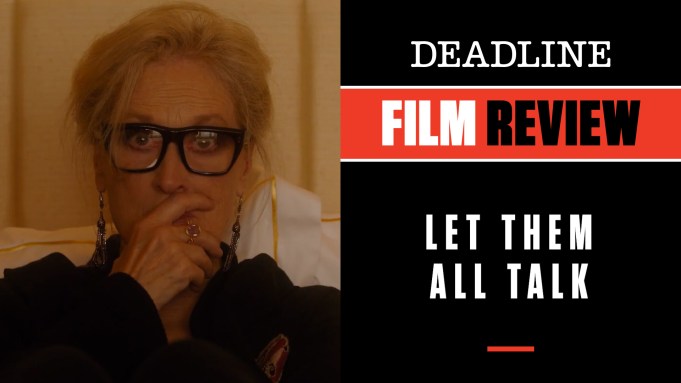 A major movie with three beloved female stars all in their 70s? Sound impossible? Fortunately, director Steven Soderbergh didn’t think so, and the resulting film, Let Them All Talk, is the result and one of the bright lights of 2020’s movie year.

The premise — a two-line idea cooked up by Soderbergh several years ago and then handed to first-time screenwriter and author Deborah Eisenberg (the short-story collection Your Duck Is My Duck) — allows all these immensely talented stars to talk, and the dialogue, which mostly is improvised, is sparkling and illuminating. This is at its heart what used to be called a “drawing room” comedy, the type of thing that hardly ever comes around anymore in movies, but it is as welcome as any genre I can name. On top of everything else, Soderbergh managed to shoot virtually all of it on board a real cruise ship, Cunard’s Queen Mary II, in a New York-to-England voyage in August 2019. He even incorporated actual passengers as extras through most of the shoot and proves his abilities as a director know no limits.

Streep, again creating an indelible character, plays Alice, a successful, high-end author who won’t fly to England to accept a prestigious award but is convinced by her new agent Karen (Gemma Chan of Crazy Rich Asians) to take a cruise there instead — and if she agrees to deliver a lecture on board, the agent can get the trip comped. Alice has one stipulation: She wants to invite two old college friends, Roberta (Bergen) and Susan (Wiest), for a kind of makeshift reunion since they haven’t spoken together in years and also bring along her nephew Tyler (Lucas Hedges) as her assistant since she plans to use the voyage also to write her new novel and he would be useful as well in keeping her friends entertained.

Unbeknownst to Alice, Karen also is joining incognito in hopes of finding out what Alice’s next novel is going to be. Once on board, the first dinner among the three friends could not be more awkward. Time has not been good to their former camaraderie, but as it goes along we see all the long-held reasons for that emerge through a series of meals, board games and other diversions over the course of the journey. Alice is a woman, unmarried and no kids, who on the surface is a huge success but beneath that lurks regrets and longings, feelings that she isn’t everything she appears to be. Streep adopts a kind of upper-crusty, affected accent to perfectly tell you this is not a woman you can easily hang with. Roberta is a tough Texas department store employee who long has held a grudge against Alice for a roman à clef she wrote that Roberta believes was about her and caused the end of her marriage as it revealed the thinly disguised character was having an affair. She also is upset, we learn, that she never shared in the proceeds of the book Alice wrote. Susan is more easygoing, now a sweet grandmother who urges Roberta to move past any negative things she once thought. The gang is back together, but, to use my own literary reference, as Thomas Wolfe wrote, “you can’t go home again.”

Meanwhile, the affable Tyler strikes up a wannabe relationship with “older woman” Karen that serves as a nice subplot. The discovery that there is another guest on the ship — a highly successful, mass-audience-pleasing novelist — adds a bit of professional rivalry to proceedings in a nice subtle way.

But the movie belongs, of course, to these three extraordinary stars, and each delivers in spades, especially when you consider they are largely making up their own dialogue as they go along, albeit with a strong template provided by Eisenberg’s 50-page treatment. Streep — who also is sterling in the musical The Prom, which also arrives this week — makes Alice memorable in so many facets as layers of the character slowly are peeled away. Wiest, as always, is pitch-perfect. But it is Bergen who steals the show, balancing Roberta’s lifelong frustrations with her own innate comic abilities to make every line she has soar. Hedges and Chan are excellent. The setting of the cruise is perfect, and this stunning ship makes for the ideal set. Once this pandemic is over and the cruise ship industry is back, you won’t be able to get a booking. This is great product placement for Cunard to be sure.

This is highly sophisticated and elegant filmmaking — one of Soderbergh’s finest, and that’s saying something. As usual, he served as his own cinematographer and editor. Thomas Newman supplies another superb score as well. HBO Max begins streaming on December 10. Producer is Gregory Jacobs. Check out my video review with scenes from the film at the link above.

Do you plan to see Let Them All Talk? Tell us what you think.