Continue to Deadline SKIP AD
You will be redirected back to your article in seconds
Skip to main content
November 2, 2020 8:59am 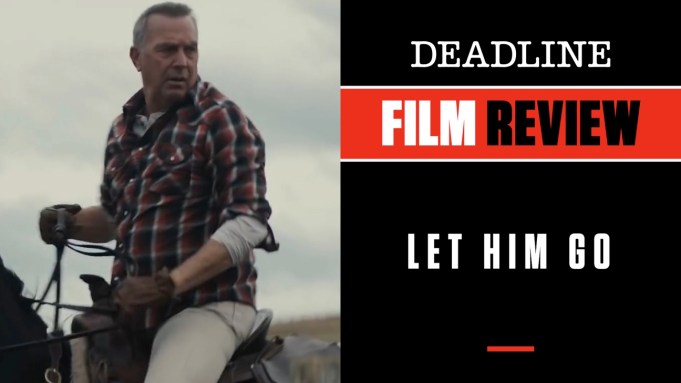 The last time Kevin Costner and Diane Lane were married on screen they were playing Superman’s parents. This time the comic book motif is gone and the union between the pair turns deadly serious in a compelling, entertaining and violent thriller set in the Dakotas and focusing on the family dynamic, and three very different mothers, in a white-knuckle, suspense-laden, slow-burning drama that offers ripe opportunity for both perfectly cast veterans to shine.

Based on Larry Watson’s popular 2013 novel, writer-director Thomas Bezucha has smartly chosen to change the 1951 setting to 1963, a momentous time in our history when everything began to change and darker times emerged for America. Against that backdrop and a tragedy that hits right at the heart of a normal-seeming family, the title Let Him Go could refer to numerous characters in different ways here. George and Margaret Blackledge (Costner and Lane) have been married about 30 years, bringing up their only son James (Ryan Bruce), who now is married to Lorna (Kayli Carter), and they have a young son of their own named Jimmy. Tragedy hits this Southwestern and horse-loving family when James is thrown from saddle and breaks his neck, dying instantly. Cut to three years later and now Lorna has just married a guy named Donnie Weboy (Will Brittain). While in town one day Margaret spots Donnie walking down the street not only abusing his stepson, but also his wife. Deeply disturbed she becomes determined to intervene and not only convince Lorna that her new husband is bad news, but also really bad news for their one and only grandson. Before she can do anything the Weboys have up and left to parts unknown. What ensues is Margaret’s effort to enlist a reluctant George to travel with her to North Dakota to track them down and bring Jimmy back, and hopefully Lorna, to live with them. Soon they are in a car and making stops to piece together the puzzle of where they can find Lorna and Jimmy, quickly learning that the mere mention of the name Weboy brings shudders to those in those parts who know that family’s reputation. Finally a meeting with one of them, Bill Weboy (Jeffrey Donovan) leads directly to a dinner invite with the whole clan when they convince him they just want to visit their grandson as they are “in the area”. That dinner with the menacing grown Weboy men and their mother Blanche (Lesley Manville) does not go well. Ultimately the pair receive stark warnings to forget any efforts to loosen the Weboy grip on Lorna and Jimmy, leading to an extremely violent confrontation in their motel room. From that point all hell breaks loose

The deliberately paced film works on several levels as a portrait of a comfortable but loving marriage marred by a seismic event, to the quiet determination to honor their son’s memory by rescuing their grandson and his mother who knows she has gotten in over her head but (rightly) fears major repercussions if she tries to leave. At its center Costner and Lane are all-pro playing a couple who communicate with few words, but have a strong relationship that can withstand just about anything it seems. Lane drives the action as the very concerned Margaret, and she has rarely been better. Costner effectively underplays George until the time comes for a reckoning both physically and within himself, a man who is finally driven to the wall. Costner is just great here and you can see why he was attracted to the role. It is one of his strongest screen turns in a while. He reminded me of the dignity and ultimate resolve Gregory Peck showed playing similar characters in a couple of movies made in the 60’s around the time this one is set, the original 1962 Cape Fear and the western The Stalking Moon. Both were about loyal family men forced to act when true evil threatens to bring down their family and everything they stand for.

The evil in this case is personified by Blanche played cannily and just under the top by a superb Manville in the kind of role I haven’t seen this great British star ever do. She is a take-no-prisoners controlling matriarch who is determined to keep Jimmy in the Weboy fold and will stop at nothing to do it. Manville burns through the screen here. Carter is also excellent, and among the male Weboy clan Donovan scores convincingly. Booboo Stewart (the Twilight saga) as a horse riding loner the couple encounter along the way is terrific, serving in a key capacity late in the film. Bezucha knows clearly how to develop taut scenes and paces the drama with just the right amount of tension an audience can stand. Guy Godfree’s sweeping cinematography captures perfectly the feeling of the Dakotas, even as Calgary Alberta is acting as the well-chosen stand- in for filming. Michael Giacchino’s score is one of his best, underlining the action but never overwhelming it.

Mitchell Kaplan and Paula Mazur join Bezucha as producers. Focus Features opens it in theatres (yes!) on Friday. Check out my video review with scenes from the film at the link above. The film has been rated R, with the MPA offering only one word of explanation for it: violence.

Do you plan to see Let Him Go? Let us know what you think.