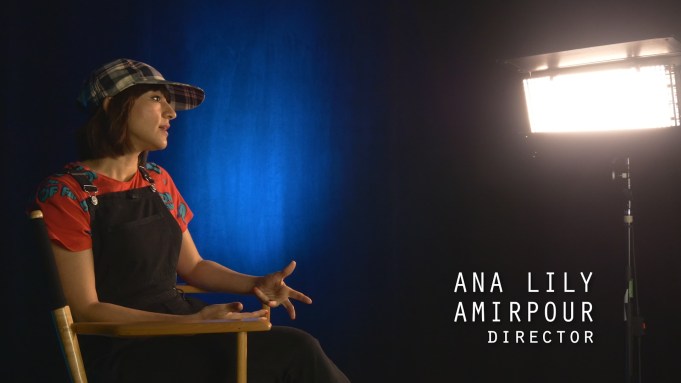 Making a splash in the indie film world with her debut feature—the Iranian vampire Western A Girl Walks Home Alone at Night—Ana Lily Amirpour declared herself an undeniable talent and filmmaker to watch. With her follow-up effort The Bad Batch—following a young woman in a desert dystopia who finds herself kidnapped by cannibals—she solidified her status as a visionary worldbuilder, picking up the 2016 Venice Film Festival’s Special Jury Prize.

Dabbling since then in documentary and a Kenzo short featuring music by Karen O., the filmmaker made her narrative television debut this season, helming a Season 2 episode of critically acclaimed FX mind-bender Legion.

Amirpour, who appeared in studio for Deadline’s Production Value video series the same day she told Deadline about her next feature, Blood Moon, explained that with Noah Hawley’s Legion, it was love at first sight. “I knew and watched the show and thought it was amazing. I actually binge-watched the entire first season in one go,” she recalled. “You didn’t know where it began or ended, and I feel that that’s so true to how a mind works.”

A superhero series unlike any other—following David Haller (Dan Stevens), a troubled young man with unreal abilities—Legion exemplifies the extraordinarily ambitious, technically sophisticated work for which Amirpour has become known. Examining her penchant for worldbuilding, the director named some of the filmmakers who inspire her in these pursuits—Guillermo del Toro, Ridley Scott and David Lynch—explaining what it is about the worlds they’ve created that resonates so strongly.

“It’s like, when the movie starts, you’re entering another time space, and that’s the thrill,” she said. “It’s really like a dream space, and the dream only has to be consistent to the dreamer, and to itself.”

While television has become the medium of choice for many of today’s prestige directors, one might wonder what TV has to offer for a filmmaker like Amirpour, who has created her own worlds from top to bottom, without pressure to conform to a preexisting narrative.

Certainly, going into Legion, Amirpour was thinking along the same lines. “Generally speaking, I knew that [in] TV, they don’t really want a director to come in and re-create a visual style, or change [it]—it’s an established look, so they just kind of want you to come in and repeat things that have been done,” she explained.

Fortunately, in the case of Legion, Amirpour’s perspective wasn’t marginalized, but rather, embraced. “It was like, ‘You know the films that I make. It’s going to be hard for me to do something if you want something very specific,’” she remembered. “And Noah was just like, ‘I want you to do it how you would do it.’ “

For more from our conversation with Amirpour—as she offers a look at storyboards crafted for Legion‘s “Chapter 10″—click above.