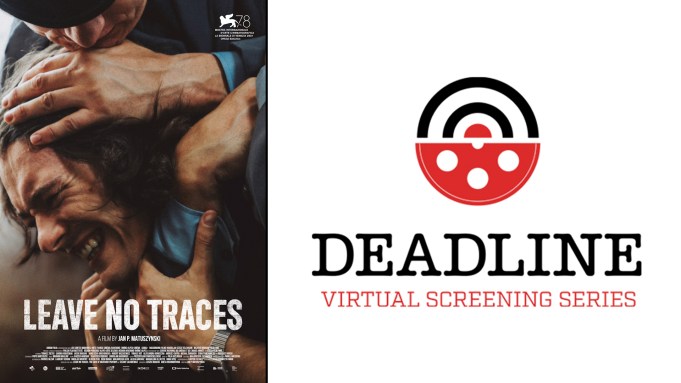 Debuting at the Venice Film Festival earlier this year, Leave No Traces instantly became Poland’s official submission for the International Feature Oscar race. Directed by Jan P. Matuszyński, it’s based on a reportage by Cezary Lazarewicz and chronicles true events that took place in 1983, when Poland was shaken by the case of a high school student beaten to death by militia. Subsequently, the only witness to the beating became the No. 1 enemy of the state.

Matuszyński and lead actor Tomasz Ziętek, sat down with us for a chat after Deadline’s virtual screening of the film (see video above).

Ziętek plays Jurek, witness to the beating of Grzegorz Przemyk. The film follows his story as the oppressive regime used its whole apparatus — the secret service, militia, the media and the courts — to squeeze Jurek and other people close to the case, including his parents and Przemyk’s mother, Barbara.

Matuszyński tells us in the video that he at first thought about doing the film from the perspective of the mother, but decided it would be “too narrow.” Instead, he focused on Jurek’s perspective, “which allows you to bring up those big questions: What does it mean that he saw everything? What does it mean the whole truth? Can you actually repeat everything that happened there?”

Matuszyński knew of Ziętek from his previous work, which includes Oscar-nominated Corpus Christi, and said the actor was his first choice. Ziętek told us he saw the structure of the film affecting the perspectives of the character “because of the amount of information, true or false, about him creates the final image of him.”

Matuszyński noted, “I had some sort of a blank spot in our history and this is why I am probably so interested in that kind of story. I was born a year after it all happened so when I read the book I thought this is a very interesting story that just happened a bit earlier — and I want to go there inside.”