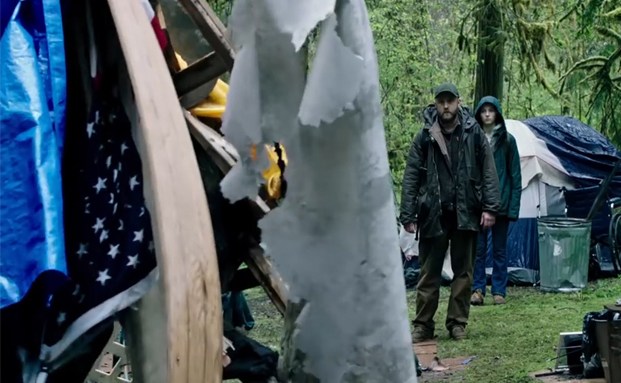 With her first narrative film since her acclaimed 2010 indie hit Winter’s Bone landed a Best Picture Oscar nomination and made a star out of Jennifer Lawrence, director Debra Granik has scored again with another film set in the rural outdoor environment. This time it is just outside Portland, OR, and inspired by a true story of a father and teenage daughter who lived with nature in the lush forests. Although their existence was well known in the area, not much was known about them or what made them choose the lifestyle they did.

Writer Peter Rock took it from there and fictionalized the story in his book, My Abandonment. Granik with co-writer Anne Rosellini creates the screen version of the tale featuring Ben Foster as Will, a military veteran with PTSD who, after coming back from the war, chooses to bring up his daughter Tom (Thomasin Harcourt McKenzie) in the lush forests outside Portland. He’s a castoff from society who prefers this kind of solitary outdoor life, which is only one his daughter ever has known. The opening few scenes set up the story as the pair go about their day-to-day routines, which include drills to avoid sightings by other human beings, particularly of the law enforcement variety.  They do make the occasional trip into the city, where Will picks up his PTSD meds at the veterans center but cashes them in to buy groceries and other needed items before heading back to nature.

Soon, though, Tom is spotted by someone, and that leads to their apprehension. They are placed in housing under supervision in order to integrate themselves back into society, but after awhile it becomes too much for Will, even as Tom is beginning to enjoy the kind of things any young teen girl might, including meeting new friends her own age. Back in nature, Will has a severe accident that forces a desperate Tom to find help, which she does with a small rural community of people in mobile homes who welcome them to stay. It is here that Tom begins to wonder if there is another kind of life than the one her well-meaning and loving father has given her.

As I say in my video review (click the link above), Granik is not the type of director who likes to use movie clichés or build up suspense in any kind of false ways. She lets her very sparse human stories play out at their own pace, and that could mean slow going for some moviegoers who demand a more conventional approach. There are no villains here, only good people who choose a certain way to live.

First and foremost this is a very different young girl’s coming-of-age story, and it is deeply affecting. Winter’s Bone proved there is definitely an audience who appreciates this authentic kind of look at life in rural America, and Granik delivers it brilliantly. A large part of the thanks also goes to cinematographer Michael McDonough and, of course, the stars. Foster doesn’t go for the clichés of the typical PTSD victim, instead offering a low-key portrayal of a man who can’t seem to find his way back to what most might call a normal existence. He’s also a good father, even if putting his daughter in trying circumstances might cause one to ponder if he really has her best interests at heart.

New Zealand actress McKenzie is the real find here, just as Granik also gave Lawrence her big motion picture break. Without a trace of a Kiwi accent, McKenzie is perfection, also underplaying the pangs of growing up in this kind of life she leads. You can look until the end of time and not find a false note in this performance.

Among the supporting cast, Dale Dickey stands out as a woman who gives the pair shelter when they most need i, but also offers some wise life lessons to Tom. Leave No Trace understandably won over film enthusiasts at Sundance and then Cannes, and now hopefully it will reach the wider audience it so richly deserves. Producers are Anne Harrison, Linda Reisman and Rosellini. Bleecker Street opens it Friday in limited release.

Do you plan to see Leave No Trace? Let us know what you think.