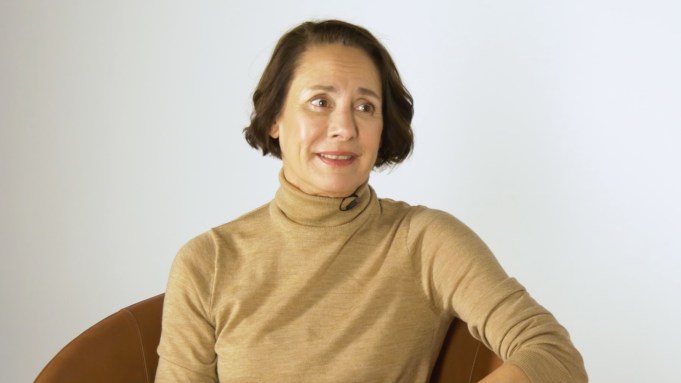 Laurie Metcalf is clearly an actor whose career is smokin’ hot right now as she covers the waterfront on Broadway, movies and TV. Currently nominated for her first Oscar as Supporting Actress in Lady Bird, Metcalf is rehearsing for the March 29 opening of the Broadway revival of Edward Albee’s Three Tall Women, opposite Glenda Jackson and Alison Pill (previews start February 27). That comes two days after the return of ABC’s Roseanne for a 10th season (delayed by 20 years) on which Metcalf reboots her three-time Emmy-winning role of Jackie. Just last June, she won her first Tony Award for Leading Actress in A Doll’s House Part II.

Metcalf calls the last few months an incredible whirlwind, and we talk about all that and more as she visits our PMC studios for the latest episode of my Deadline video series The Actor’s Side. She also discusses the brilliance of writer-director Greta Gerwig in creating the universal mother-daughter dynamic at the center of Lady Bird, as well as detailing how they pulled off that hilarious car scene between her and Saoirse Ronan at the beginning of the film. She also explains how “surreal” it was to go back to doing nine new episodes of the landmark sitcom Roseanne after being off for two decades, and reveals how they will be addressing the issue of Donald Trump in the first episode.

Metcalf also talks about what she calls her “camera phobia,” and the learning curve she is still on in making films and TV series — while admitting that theater is her first love. We also discuss the one superstition she has each time she performs a play, and why she is referring to her legendary newest co-star Jackson as a “monster”; Three Tall Women marks the two-time Oscar winner’s return to Broadway and the stage after decades in Parliament in England. Metcalf said she couldn’t resist being back on Broadway just to be in the room where it happens with Jackson.

Check out our conversation above. To watch other episodes of The Actor’s Side, visit our Facebook page.