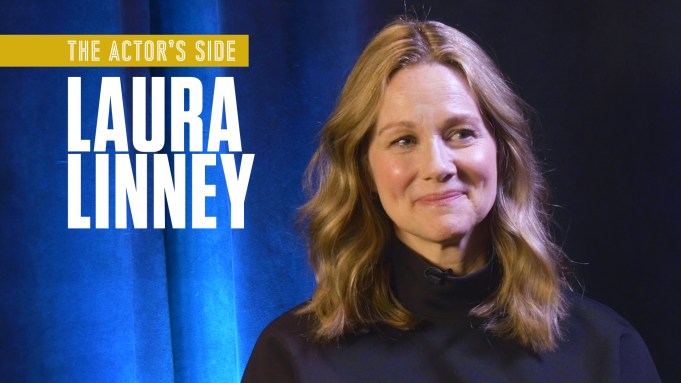 Our new Emmy-season edition of Deadline’s video series The Actor’s Side begins today with my conversation with Laura Linney, co-star of Netflix’s Ozark, now in its second season and getting hot Emmy buzz.

That is something Linney is definitely used to since she has already won four Emmys for such shows as The Big C, John Adams and Wild Iris — in all three cases winning Lead Actress in a Miniseries or Movie — as well as for Guest Actress Comedy Series for her appearance on Frasier. In addition,  she has three Oscars nominations for supporting in Kinsey, and lead actress in both You Can Count On Me and The Savages. Add to this four Tony nominations for her work on Broadway and two Golden Globes among many other honors, and you have a pretty impressive career that is still going strong.

This year, the versatile actress can be seen in not one but two major TV projects for Netflix including her role as Wendy in Ozark, where she is married to Jason Bateman’s character and finds herself in increasingly complicated predicaments as the wife and mother of a family in peril on the other side of the law in the Missouri Ozarks. She also will be seen this summer returning to her role as Mary Ann in the latest series reboot of Tales of the City, a role she has now played four times in 1994, 1998, 2001 and 2019.

One of the most acclaimed actresses, Linney is equally comfortable in movies, TV and on the stage, where she most recently had a triumph in London in the one-woman play My Name Is Lucy Barton.

Check out my conversation with Linney in the video above. To see past episodes of The Actor’s Side, click on the series’ Facebook page.