Continue to Deadline SKIP AD
You will be redirected back to your article in seconds
Skip to main content
August 25, 2020 8:41pm
14Comments 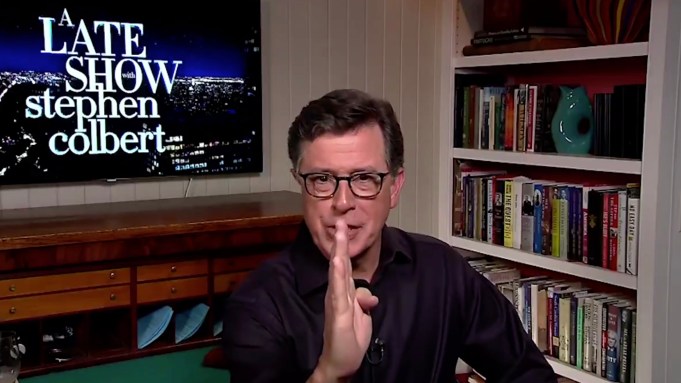 The Late Show with Stephen Colbert brings yet another silly video to its host’s coverage of this week’s Republican National Convention.

Adding to Colbert’s political Avengers: Endgame spoofs was his latest, a Trump version of The Jackson 5’s earworm “ABC.” Over the easily recognizable instrumentals, Donald Trump and his family begin singing their take on the 1970 chart-topper.

“You’ll get to learn from crazies, things you never, never knew before,” President Trump starts out.

Joining the President are Melania Trump, Ivanka Trump, Donald Trump Jr. and Eric Trump. They sing about the topics RNC viewers can look forward to hearing about at the week-long event, from the president “curing” COVID-19 to learning that “racists rock.”

The made-up sing-a-long also touches on some of the previous night’s highlights. The Trump family sings about Kimberly Guilfoyle’s impassioned speech from night one, during which she screams her support for President Trump. Over a clip from the former Fox News personality’s Monday night moment, the Trump family sings in perfect harmony that viewers will learn “how to scare children.”

The Late Show clip also takes on the First Lady’s latest Rose Garden renovations, Rudy Giuliani and his teeth. The Trump family closed off their rendition of the hit number with one last chorus: “R-N-C, say goodbye to democracy.”

The Republican National Convention kicked off on Monday and featured speeches from a number of conservative personalities. Though the president did not appear on the first night of the convention, he is set to make appearances for the remaining nights. Vice President Mike pence, Ben Carson and Mitch McConnell are among those slated to appear at the RNC.

Watch The Late Show with Stephen Colbert clip above.