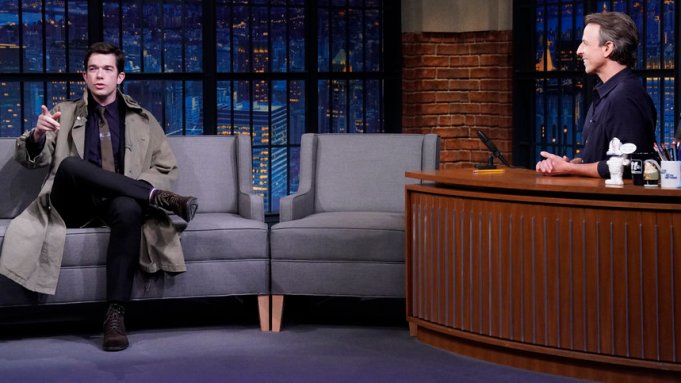 Fresh from hosting Saturday Night Live, comedian John Mulaney has got himself a surprising new gig – as a writer on Late Night with Seth Meyers.

The Kid Gorgeous comedian has officially joined as a staff writer on the NBC show. He joins the likes of Amber Ruffin, John Lutz, Sal Gentile, Karen Chee and Jenny Hagel among others on the staff, which counts Mike Shoemaker as showrunner and Alex Baze as head writer.

Shoemaker revealed the news Thursday on Twitter, where he said that he hopes Mulaney “stays for 100 years but I will settle for as long as John wants.”

It marks a relatively busy 12 months for Mulaney, who previously worked with Meyers on SNL. His Netflix special John Mulaney & The Sack Lunch Bunch was released at the end of 2019.

His new job comes as he appeared the couch on Late Night with Seth Meyers talking up a theory that ghosts had a lot to do with the 2020 Presidential Election – in particular the likes of John Lewis and John McCain. Watch the bit above.

He floated the theory as he was wearing a trench coat gifted to him by The Strokes lead singer Julian Casablancas, in which he found the rock star’s sunglasses in the pocket.

John Mulaney likes to work so this week he officially joined Late Night with @SethMeyers as a staff writer.  I hope he stays for 100 years but I will settle for "as long as John wants".
Here's the 1st sketch from rookie @latenightseth writer John @Mulaney:https://t.co/IMZ4DHbOAJ