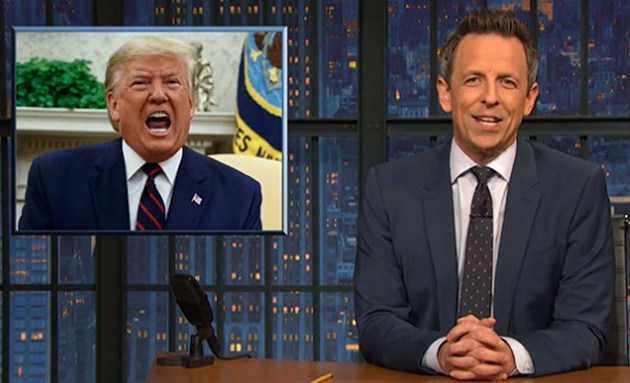 Seth Meyers is back in the studio and in usual Late Night fashion, the late-night host blasted President Donald Trump’s latest news-worthy moments. The first “A Closer Look” segment in the studio since the COVID-19 pandemic shutdown takes aim at the president’s claims that he’s anti-war.

“Probably Trump’s most brazen and infuriating act of reality distortion came when he tried to con people into thinking he’s an anti-war president,” Meyers said.

The late-night host said Trump’s assertions were a response to reports by The Atlantic that the president called veterans and service-members “suckers” and “losers.” Since last week’s report, the President has said during press conferences that military members love him and boasted that he’s gotten the United States out of wars.

Meyers went on to counter Trump’s defenses by listing the president’s involvement in Middle East conflicts, from those in Yemen to Saudi Arabia. He also featured a 2018 clip in which Trump showed Crown Prince Mohammed bin Salman the various hardware the used by U.S. armed forces.

After targeting the president, Meyers went on to criticize Fox News for its coverage of the veteran-related report. He showed clips of Fox News personalities calling The Atlantic report a “hoax” and questioning the story’s anonymous sources, which have since been backed by Fox News’ Jennifer Griffin.

“Your own network confirms it. Do you watch your own channel or do you take naps until Trump tweets something?” Meyers asked.

He ended the segment saying that Trump and Fox Media can be working towards a common goal together, reiterating how the news outlet questions the legitimacy of fellow journalists, repeats Trump’s claims.

“They’re trying to concoct an alternate universe where coronavirus is over, the economy is back and a president who brags about arms sales is anti-war,” he said. “If that doesn’t work, Trump will just try to convince people that he’s Joe Biden.”