UK PM Boris Johnson To Step Down Amid Resignations & Scandals: Timetable For Successor, Analysis Of What It Means For British TV & More
Read the full story
August 11, 2020 8:28pm 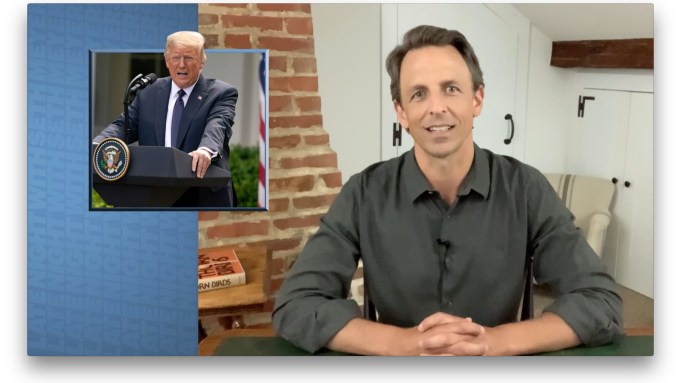 After taking aim at President Donald Trump’s latest round of executive orders, calling them “meaningless and unconstitutional,” Late Night host Seth Meyers called out the president’s restructuring of the United States Postal Service.

The USPS, which is a public service, has undergone hard times as the COVID-19 pandemic caused decrease in  the amount of mail and packages in transit. As universal vote-by-mail measures have entered the conversation, once again prompted by the coronavirus’ spread across the nation, President Trump has not only voiced his concerns about the proposed voting process but also placed GOP supporter and major donor Louis DeJoy as postmaster general.

“That is chilling the President thinks he can decide which votes count and which one don’t,” Meyers said on Tuesday’s episode of Late Night. “Soon he’s going to start crossing out ballots himself and we’ll all know bc he’ll sign them himself.”

The SNL alum’s criticism comes after he says the President continues to explore different strategies for winning the 2020 election. Meyers mentions Trump calling for an investigation on Joe Biden’s connection with Ukraine and “cold-calling random countries asking them to help him cheat.” But when those didn’t work out in the president’s favor, Meyers said he has “moved onto his next scheme: sabotaging the post office.”

He then took a deeper dive into the USPS’s financial troubles, highlighting a Bush-era piece of legislation that requires the postal service to fund the retirement of not only its current workers, but that of its future employees as well. The postal service’s financial hardships, Meyers said, came at an opportune time as he said Trump is using the USPS’s lack of funds to achieve the goal of “destroying the postal office for political gain.”

The segment went on to feature footage of Trump saying how voting by mail can make for longer waiting period to learn the results. During the video of July a press conference, Trump repeats how the process of counting the mail-in ballots could take somewhere between weeks or years to identify the results of the election.

“We can have a safe, successful election if we just adequately protect and fund the post office. You don’t have to wait years for results, but even if you did, why do you complain? Waiting around is like the one thing you’re good at,” Meyers joked about the President’s comments. “Your favorite sport is 98% waiting around.”