Continue to Deadline SKIP AD
You will be redirected back to your article in seconds
Skip to main content
September 8, 2020 7:32pm 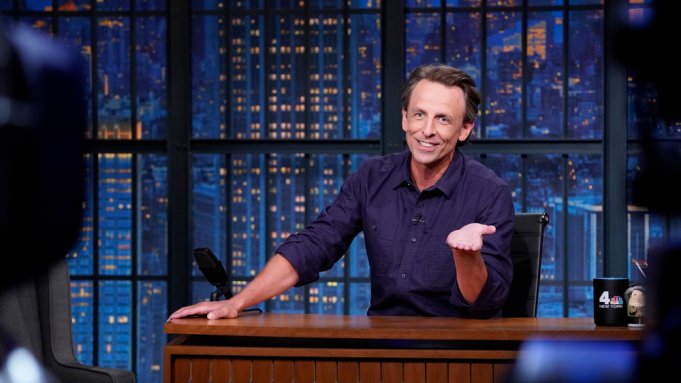 Late Night with Seth Meyers became the latest talk show host to return to the studio tonight, opening his A Closer Look segment with a gag about the audience-less 30 Rock.

Meyers said, “It’s just nice to be around people again” as the camera panned to an empty crowd.

Meyers, who usually tapes in Studio 8G, has been taping from his attic for the past five months – making jokes out of the talking Sea Captain and a well-worn copy of The Thorn Birds. During that time, the NBC show, which is run by Mike Shoemaker and exec produced by Lorne Michaels, hit its 1,000th episode.

“During six months of quarantine, in which I rapidly descended into isolation induced madness, we’re back in our studio, here in 30 Rock in New York city,” he added. “Now that we’re back in the studio, I give you my solemn oath that there will be no more talking inanimate objects that interrupt the flow of A Closer Look with their ridiculous interjections.”

During his first A Closer Look segment, Meyers went in on the RNC – having been on hiatus while it was on and finished up with his take following that report in The Atlantic. “He probably thinks anyone who dies is a sucker,” Meyers said.